The late Byzantine period begins soon after the arrival of the Franks in Greece and the foundation of the Latin States. In northwestern Greece, part of the Byzantine Empire managed to survive as the independent despotate of Epirus. Another part had survived in Asia Minor and is called the Empire of Nikaia, the seed of a re-establishing Byzantium. Founded by Theodoros Laskaris, the son-in-law of a previous emperor, it would last until 1261, when his forces recaptured Byzantium from the Western Emperor. From then on, the rulers of Byzantium would do everything in their power to seize the lost territories. Foolishly, they moved most of their troops from Asia Minor to Europe, ultimately leaving Asia Minor without the troops to withstand a further Turkish advance.

The Peloponnese: Despotate of the Morea

In 1259, William de Villehardouin fought at the Battle of Pelagonia against the troops of the Emperor of Nikaia, as an ally of the despot of Epirus. However, he was betrayed 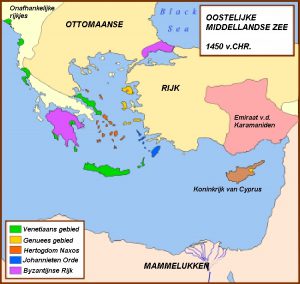 by the Epirots and taken prisoner. As a prize for his freedom, Villehardouin was forced to give up three of his strongest castles on the Peloponnese to the Greeks, who then built a second capital, the magnificent Mystras, near ancient (and deserted) Sparta. The despotate of the Morea was born. From then on, the Peloponnese would remain the battlefield between the rulers of Mystras and the Frankish princes of Achaia. Ironically, it was the Byzantines who recruited Turkish mercenaries over and over again. In the 14th century the principality of Achaia became the subject of a power struggle between all the great royal houses of the west, until in 1432 Thomas Palaiologos – then despot of the Morea – succeeded in annexing the principality by marriage to the daughter of the latter “ independent prince of Achaia, Ladislaus the king of Naples. When in 1453 the Turkish Sultan Mehmet II “the Conqueror” besieged Byzantium, the rulers of Mystras (two brothers of the emperor) did not send help, exhausted by constant internal struggles. The Greco-Albanian population of the Peloponnese revolted against Mystras, who responded by asking the Turkish sultan for auxiliary troops! Twice Thomas and Demetrios Palaiologos asked the Turks for troops, until Mehmet himself crossed over to Greece and stayed. Almost all of Greece (and large parts of the Balkans) was incorporated into the Ottoman Empire.

For several centuries the Venetians would still resist the Turks on the Ionian islands, Crete and some other bases and even go on the offensive on a few occasions. For example, Chios and Naxos did not fall until 1577, and Candia, the capital of Venetian Crete, did not open its gates until 1669 after a siege of 25 years. The (Venetian) island of Tinos did not fall into the hands of the Turkish troops until 1715, after the renewed hostilities between the Turks and the Venetians had ended in a fiasco for the latter.

In 1571, the Ottoman Empire’s urge to conquer was still very much alive. 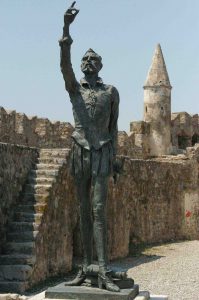 After the Turks had secured the eastern part of the Mediterranean Sea in that year with the conquest of Cyprus from the Venetians, they turned to the west. There, the Venetians had meanwhile joined the so-called Holy Alliance, a coalition of Catholic states led by the Pope. The main members were Spain (with Naples and Genoa), the Duchy of Savoy, the Hospitallers of Malta and the Grand Duchy of Tuscany. A huge fleet was assembled with more than 200 galleys, 100 supply ships and 30.000 soldiers, which took position at Corfu. The even larger Ottoman fleet had meanwhile gathered at Lepanto / Nafpaktos. On October 7, 1571, the two fleets fought in the Gulf of Patras, wiping out virtually the entire Turkish fleet and liberating 12.000 Christian galley slaves. The battle caused the Turks to lose all their experienced captains and sailors and for decades the Mediterranean was divided into a Christian Western part and an Ottoman Eastern part. The significance of the naval battle for the development of Europe can hardly be overestimated and many works of art (including in Rome) celebrate the Christian victory. Incidentally, William of Orange saw an ally in the Turkish sultan in his revolt against the Spaniards in the 80-year war. The naval battle was the last major battle in which galleys would play a significant role. After that, the era of the large sailing ships would come to an end.

In 1683 a series of armed conflicts broke out between the (New) Holy Alliance (now mainly the Habsburgs, Russians and Venetians) and the Ottoman Empire, which would end in 1699 with the so-called Peace of Karlovac. As a result, the Ottomans had to give huge areas of territory in the Balkans (including Hungary and Serbia) to the Habsburgs, the Crimea to Russia. The Venetians hired en masse mercenaries in Italy and Germany and landed in 1685 under the command of Francesco Morosini (the Doge of Venice) at the fortress of Koroni on the southern Peloponnese, which fell after 49 days. Soon the fortresses at Pylos-Navarino, Nafplio and Argos also fell. In July 1687 the forts of Rio, Antirrio and Nafpaktos also fell and in August 1687 Corinth and Mystras, with which (almost) the entire Peloponnese was conquered. Monemvasis would follow in 1690.

– Destruction of the Parthenon 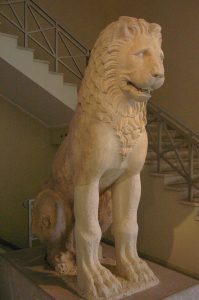 In 1687, Morosini’s troops laid siege to the acropolis of Athens, where at the time the Parthenon was still intact, but turned into a powder house by the Turks, convinced that the Italians would never shoot at such a magnificent building. However, on September 26, the Italians scored a direct hit, which would turn the building into a ruin. When Morosini took control of Athens in 1688, he tried to remove the horses and chariots of Athena and Poseidon from the temple’s pediment to take them to Venice. However, the images fell down and broke into dozens of pieces.

– Robbery of the Lion of the Piraeus

A huge (3 m. high) lion from 350 B.C. was captured by Morosini in the Peiraeus in 1687 and transported to Venice, where it stands in front of the Arsenal, as a symbol of St. Mark, the patron saint of Venice. On the shoulders is an inscription in runes in the form of a “tapeworm” (an elongated dragon-like creature with the inscription on the body), most likely applied to the lion by Viking mercenaries of the Byzantine emperors in the 11th century. Unfortunately erosion and heavy air pollution have affected the inscription to such an extent that interpretation is difficult. Copies of the lion are in the Peiraeus Archaeological Museum and in the Swedish Museum in Stockholm.

Morosini died in 1694, who was honored by the Senate of Venice with a bronze bust during his lifetime and was given the honorary title of Peloponnesiacus (“conqueror of the Peloponnese”). Most of his conquests had already been lost to the Turks in 1715. But in some places you can still see modernizations to old castles, built by Morosini. The most important are the enormous castles of Nafplio, Navarino and Rio.