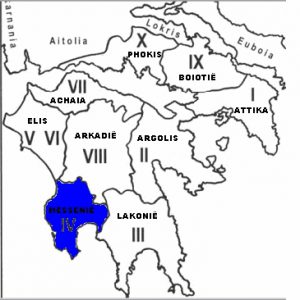 Bounded by the Neda River to the north and the Taÿgetos Mountains to the east, the Messenia region was one of the most prosperous and densely populated regions of Greece in prehistoric times and especially the Bronze Age. The famous palace of Nestor in Ano Englianó, rightly identified with the Mycenaean-Homeric Pylos, and the many domed tombs from the Mycenaean period, which dot the area, bear witness to this. However the area flourished, with the “return of the sons of Heracles” around 1100 B.C. and the related invasions of the Dorians it got a serious blow, from which it was not able to recover until late in the classical period. Then when the Spartans around 750 B.C. began the decades-long wars of conquest, known as the Messenic War, and culminating in the area’s final submission to Spartan rule, Messenia sank into shadow existence for many centuries, plunging the population into a state of slavery (as helots in the service of Sparta). The continuous uprisings of the (Doric) Messenians are followed again and again by brutal Spartan oppression and the retreat of parts of the helot population. Incidentally, Pausanias’ account of these wars is based on an idiosyncratic mixture of the prose work about the first Messenic war by the writer Myron with the nationalistic epic about the second or third Messenic war by the poet Rhianos. Only in 369 B.C. The power of the Spartans would be broken with Theban help and the city of Messene  established as the capital for the many Messenians who returned from all over the Mediterranean to live in the “land of their fathers”. But the centuries that followed will also be characterized by constant tensions and wars with the Spartans, with the Messene area subject to strong fluctuations. For example, Messene under Philippos II of Macedonia controlled the main cities of Messenia (Pylos, Asine, Koroni, Thouria, Pharai and Abia), around 180 B.C. to assist those same cities as “independent allies” as members of the Achaean League.
Under the Romans, Messene enjoyed its status as the most important city of Messenia for some time, only to receive severe blows again in the Middle Ages: Slavic tribes caused great damage to the region, including the population of Korone fleeing and settling in the more defensible Asine, who is then renamed Koroni. The original Korone was abandoned until the 19th century when it was repopulated from the Mani and named Petalidhi.
Especially during and after the Frankish conquest of Greece (from 1206 AD), the port cities of Messenia gained great importance as staging points for the Venetian trade in Constantinople and the pilgrimage routes to the Holy Land. Pylos, Methone (Mothon), Koroni (Coron) and Pharai (Kalamata) owe their Frankish-Venetian fortresses to this period, which were often further developed in the Turkish era.