From the ancient “cities” of Elis, Olympia is of course the best known and also the most interesting to view. Reading Pausanias shows that Olympia was not a city-sanctuary combination, as was Delphi, for example. Olympia is purely a Zeus Sanctuary (also known as the Altis), with some sanctuaries around. In ancient times the polis was Elis, the name of the region Elis, or – even earlier – Pisa in the region of Pisatis.

Games (and its origins)

The Altis is a very green area, with numerous trees, on the south side the Alpheios River, on the west side the Kladeos River. The north side is bordered by the Kronos mountain. Olympia is known  as the place of the Olympic Games, a four-yearly festival that was considered the most important in Greece. During these games (the earliest historical games date from 776 B.C., the last from 393 A.D.) it was common that all Greek nations (or cities, poleis), if only temporarily, ended their feuds and wars, so that the athletes could participate in this festival in a sportive, sanctified atmosphere. The origins of the games are shrouded in mystery, and have been the subject of debate since ancient times. Pausanias reports several points of origin, most of them mythical. For example, during the earliest games, the gods themselves would have competed against each other, while in a subsequent version Heracles was the founder (with his cousin Iolaos as the main sports hero). The most widespread myth about the origin of the games is the myth of Pelops (namesake of the Peloponnese, the “island of Pelops”) and Hippodameia, the daughter of Oinomaos.

After 394 A.D.  the “pagan” Games had been abolished by imperial order, the temples were destroyed in 426 and left to the natural elements. Earthquakes and floods did the rest,  the German excavators started their work in an almost empty valley.

The temple of Zeus him (above, an old reconstruction, with the asaltar next to it). Above left the famous (but lost) statue of Zeus, erected after the victory of the Greeks over the Persians in the Persian wars. The sculpted metopes show the works of Heracles, while the well-preserved façade sculptures on one side depicted the battle between the Lapiths and Kentaurs, with the strict Apollo in the middle, and on the other the preparations for the match between Pelops and Oinomaos. Inside is the famous statue of Zeus Olympios, made of gold and ivory by the sculptor-architect Pheidias, one of the Seven Wonders of the World, described in detail by Pausanias. The Statue was transferred in late antiquity to the palace of the (Eastern) Roman emperor in Constantinople, and was lost in a palace fire 900 years after it was founded in 456 B.C.  From the countless gifts that  stood in the temple, of particularly importance is  the so-called Nike of Paionios, founded by the Messenians following a victory over Spartans.

The temple is quite poorly preserved, although there is still a lot of restorationwork going on to revive some of the old grandeur.

See my page about the Olympia Museum for more photos of the very well preserved façade sculptures.

On the photo above left the temple of Hera (600 B.C.), the oldest temple on the site, with columns dating from different periods, which replaced the original wooden columns. A huge painted “discus” served as akroterion (roof decoration) for this temple (center). 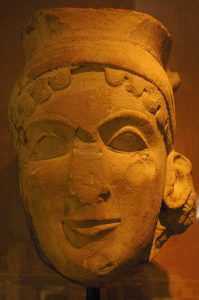 Among the remains of this temple, the famous Hermes of Praxiteles has been found, which can be admired in the museum (photo above.) The head of the cult statue of Hera has been found, a more than 2 times life-size archaic statue, dating from about 600- 550 B.C. 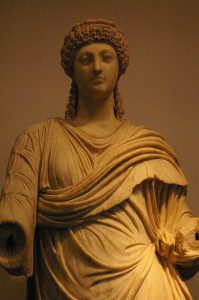 No trace has been found of the “chest of Kypselos”, which is extensively described by Pausanias, a precious holy gift consecrated by Kypselos, tyrant of Corinth around 640-610. However, several reconstructions have been made over time based on Pausanias’ description. One is given here (click on the image below for an enlargement). Kypselos’s chest in the reconstruction of Henry Stuart Jones (Journal of Hellenic Studies, 14 (1894), 30-80). The more recent reconstruction of Wilhelm von Massow (Athenische Mitteilungen 41 (1916) pp. 1-116 differs in many details from the above reconstruction, but essentially follows the same way of working, a reconstruction of the representations based on (Corinthian) vases from the period around 600 B.C. The main differences are in the details of the reconstructions (Massow had more finds available for comparison), and in the overall design: where Stuart Jones assumes a decoration of the chest on three sides (the fourth side must have been against the wall of the temple), Massow assumes that the chest was worked on one side only, the front.
Finally, the temple of Hera was filled with numerous prominent women from Elis, and later from the imperial families of Rome. A very fine example of this is the statue of Poppaea, the second wife of Emperor Nero.

The third (rather small) temple was the so-called Metroön, dedicated to the mother goddess Rhea (Cybele), of which, however, little has been preserved. In the Roman period this temple was used for imperial worship, which explains why the excavators discovered a statue of Claudius and a second of Titus on the spot.

A row of treasure houses, dating from the 6th and 5th centuries B.C., is located on the edge of the Altis adjacent to the well house of Herodes Atticus, of which again very little has been preserved. These buildings, like those in Delphi that serve to store very precious, but also fragile gifts, are almost all erected by the Greek colonies in the west, southern Italy and Sicily. The recovered fragments, which sometimes allow a fairly accurate reconstruction, can be seen in the museum of Olympia. 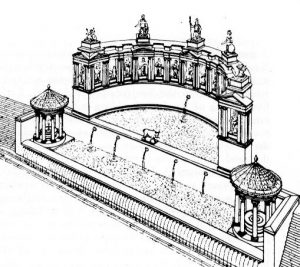 Between the treasure houses and the temple of Hera was the flamboyant fountain (Nymphaion) built by Herodes Atticus (around 150) in an attempt to restore the damaged buildings of the past. The fountain was the final piece of an aqueduct of about 3 km. length, which was to provide the sanctuary with clean water. The semicircular exedra contained 15 niches, in which statues of Herodes Atticus himself and his imperial patrons were arranged, while tiny round temples were arranged on either side of the actual basin. A marble bull contains an inscription of Regilla, the wife of Herodes Atticus, in which she (as a priestess) claims to have donated the well house to Zeus.

Buildings which had to support the sanctuary’s increasingly important sporting function were a wrestling arena (palaistra) and a gymnasion (a large rectangular building, with a large courtyard used by the athletes for training in javelin, and discus throwing) erected in the 3rd and 2nd century B.C., when an arched entrance from the sanctuary to the stadium was also constructed. Along this entrance stood the Zanes discussed by Pausanias, the Zeus statues set at the expense of fined athletes.

Above and left, the palaistra (wrestling arena); Right: Demeter Chamyne’s stadium and altar, directly opposite the stand of the Hellanodikes. 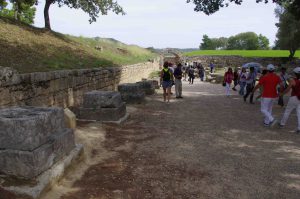 The Zeus statues (Zanes) shown on the reconstruction are rather boring, but the story Pausanias tells makes it clear that even in ancient times, sport was not entirely free from corruption, bribery or match fixing. I quote from 5.21.2 ff.

When you take the road from the Metroön towards the stadium, you have on the left at the end of the Kronos Hill, directly against that hill on a platform of stone,  a few steps upwards. Against that platform are bronze statues of Zeus, which are made from the gainings of the fines imposed on athletes who have broken the rules of the Games. They are called Zanes by the locals. (3) The first Zanes, six in number, were lined up during the 98th Olympiad. Eupolos from Thessaly had bribed the participating boxers, the Arkadian Agetor, Prytanis from Kyzikos and then Phormion, who came from Halikarnassos and had won in the Olympiad before that. […] (4) On these images are written – with the exception of the third and fourth – epigrams. The first epigram wants to make clear that one should achieve an Olympic victory not by money, but by the speed of his feet or by his physical strength. The verses on the second image say that the image is there to honor the god, out of devotion of the Eleans, and as a warning to athletes who break the rules. The content of the poem in the fifth image are all kinds of praise for the Eleans, not least because of the fine for those boxers. The verses on the last image want those images to be a lesson for all Greeks to never pay money for an Olympic victory. 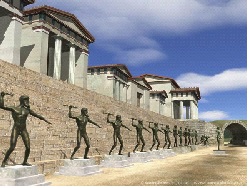 It is striking that this one man had to pay the cost of six man-sized statues of Zeus. In addition to Eupolos, Pausanias mentions another four or five groups of statues founded by other cheaters. A refusal to pay meant exclusion of the entire state from future games until the fine was paid, while in one case the  sanctuary in Delphi proceeded to deny the city of Athens access to the oracle of Apollo because Athens did not care about exclusion from the Olympic Games. It goes without saying (well…) that Athens finally gave in, paid the fine and that the whole story was placed under the Zanes.

Information on the games (click) Not in progress yet

Philippos of Macedonia founded the so-called Philippeion in 338 B.C., after the battle of Chaironeia, which brought him victory in Greece. A round building near the current entrance to the site, where he had statues of gold and ivory sdrawn up from himself and his family (his mother and father, wife Olympias and his son Alexander), they were made by the sculptor Leochares.

The Pelopion (in the foreground), a miniscule sacred forest dedicated to the hero Pelops, thought to be buried here, surrounded by a pentagonal wall. Access was given, from the 5th century B.C., by a monumental propylon (entrance building) with Doric columns. Huge amounts of archaic bronze and terracotta votive gifts were found in this court.

Around 350 B.C. the so-called Echo-Stoa was established, which had to border the actual sanctuary from the stadium, while around the same period a stoa was also constructed on the south side to border the altis on the south side. In front of it, on top of huge pillars, are the statues of Ptolemaios II and his wife Arsinoë. Only small remains of this building are currently visible.

Around 300 BC. The largest building of the site, the so-called Leonidaion, was erected to accommodate the many pilgrims and other important visitors to the sanctuary appropriately. This building consisted of a large columned courtyard, around which guest rooms were built. In its original form, the building had a peristyle courtyard. Later the building was renovated, including the construction of a large pond instead of the inner garden It was used as a residence for the Roman governor of the province of Achaea.

The workshop of Pheidias was converted into a church in late antiquity, something to which the building owes its relatively good condition. The original dimensions of the building corresponded exactly to the dimensions of the cella of the temple of Zeus, to allow the sculptor to match the proportions of the statue to the available space. In the renovated church, antique columns are decorated with floral motifs to give them a Christian touch.