The Marathon plain is important not only for the historical victory of the Greeks over the Persians in 490 BC, but also for the many new archaeological discoveries made in the 1960s.
The most important sites are of course firstly the burial mound (soros) in which are buried the Athenian dead (192) who died in the battle against the Persians. The hill, almost 10 meters high and 60 meters in diameter, offers a good view over the plain of Marathon, but of course it is not allowed to enter. At the foot of the burial mound is a modern copy of an archaic tombstone, the “Warrior of Marathon,” in fact the headstone of a soldier who fell about 20 years earlier. The original gravestones of the fallen have all disappeared.
The Victory Monument mentioned by Pausanias, a simple ionic column near the church of the Panagia Mesosporitissa, lies against the “Great Swamp”.
If you take the road to the museum (with beautiful images of an Isis shrine associated with the famous “Marathonese” Herodes Atticus, you will pass a large burial mound built of loose stones: the burial mound of the “Boiotians from Plataia”, excavated in 1969-1970. A visit to the museum is certainly worthwhile, because of the many finds from the various prehistoric burial mounds in the area Immediately to the north of the museum you can see (under a shelter) some of these prehistoric graves.

Right: The burial mound for the 192 Athenians. Entirely against normal practice and intended as the ultimate tribute to the fallen, the fallen Athenians were not brought back to Athens to be buried there, but were buried on the spot. Excavations in 1890 revealed remains of ash, charred bone material, and burial vases from the early fifth century. Below: The (reconstructed) victory monument of the Athenians.

Sanctuary of the Egyptian Gods 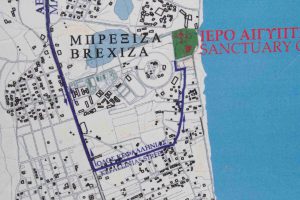 At the village of Brexiza (between Marathon and Nea Makri) you can see impressive remains of the Shrine of the Egyptian Gods, with concrete replicas of the most important statues found there and now in the Marathon Museum. The site features extensive remains of a bathhouse built by Herodes Atticus (plus 160), but more important is the sanctuary built on a small island surrounded by wetlands. With the construction of this sanctuary, known as the “Sanctuary of Canopus”, Herodes Atticus imitated Emperor Hadrian, who had a Serapeion built on a small island near his large villa in Tivoli. In the center was probably a small pyramid surrounded by a water feature. All around were impressive entrance gates, “guarded” by Egyptian gods. Many column remains testify to the luxury of the complex, while smaller ornaments also exude an Egyptian atmosphere.

Serapis / Sarapis was the creation of the Greek-Egyptian king Ptolemy Soter I, who wanted to make the Egyptian cult of the dead god Osiris-Apis (in itself a merger between the bull god Apis and the older dead god Osiris) acceptable to his Greek subjects. Ptolemy had a dream in which an “unknown god” asked him to transport his statue to Alexandria. There the god was “recognized” as Serapis by a priest from Eleusis and an Egyptian priest (Manetho). The god was worshiped in the shape of a Hades-Pluto-like figure, with the dog Kerberos at his side and an Egyptian snake at his feet. The cult proved to be a great success and continued to be popular among the Romans, also through the connection with the Egyptian Isis-Persephone (photo below from Gortys (not mine).