The later Roman era,  after Pausanias, has left Greece (especially the south) with few significant buildings but with tremendous destruction. Where the Herulians already managed to reduce large parts of Greece to ashes in the mid-3rd century (in Athens only the Acropolis was actually spared, after which a new wall in Athens was to protect only a miniscule part of the old city), once again the Goths ( in the 4th century) destroyed many parts of Greece.

Alaric’s march in the 4th century was originally aimed at Constantinople, but when he failed to do anything there, he moved south through Thessaly and the pass at Thermopylai into Greece. After some time he broke off the siege of Athens (he thought he had seen the goddess Athena walking over the walls with helmet, shield and spear), after which he was welcomed by the population and even offered a tour of the city. He then directed his raids towards Eleusis (which he totally destroyed: the Mysteries would never be celebrated again) and the Peloponnese, where he captured the major cities (Corinth, Argos, and Sparta) and sold much of the population into slavery. Eventually he managed to escape to the north of Greece with most of his booty, and was even appointed magister militum per Illyricum (commander of the cavalry in Illyria) by the emperor of the Eastern Roman Empire, a title that conferred the desired respect on him from the emperor, in addition to the right to supply his men at the expense of the imperial stores of food and weapons.
Of course, in typical Roman buildings after Pausanias, we must first of all refer to the triumphal arch in Thessaloniki, with its typical Roman scenes of soldiers, vanquished enemies and a triumphant emperor (who got a victory-wreath on the head by an eagle, symbol of Iuppiter-Zeus).

The Triumphal Arch of Galerius (297), erected after a victory over the Persians, as part of a much larger complex. Drawing: the Galerius arch from 1755. 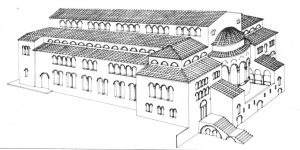 The most important architectural remnants of early Christian Greece are, of course, the ruins of the oldest basilicas, scattered all over Greece, and testify to the rapid (and total) replacement of the old religion, which inspired Pausanias so much. During this time, most of Greece’s temples were deliberately destroyed by religiously inspired fanatics.

The oldest churches built in Greece still have the typical shape of the Roman basilica: an elongated building with an apse at the end and two rows of columns, dividing the building into a nave with two side aisles. Used by the Romans as a space where many people could gather for trade or justice, the basilica was by definition better suited as a church building than the Greco-Roman temple, which served as a home for the deity and had no place for the gathering of large groups of believers. As with all later Byzantine churches, the apse at the back is separated from the rest of the church by a wooden screen, which was later usually decorated with icons and bears the name iconostasis. In the period following the late Roman period, almost all early Christian basilicas in Greece fell prey to the destructiveness of the invading Slavic peoples. As a result, no intact late Roman, early Byzantine basilica has survived anywhere in Greece except Thessaloniki. Excavations show the floor plans of the often enormous buildings. Below: three examples of an early Christian basilica.

Also of great importance are the late Roman fortifications, built to stop the population movements of the 3rd, 4th and 5th centuries. Emperor Theodosius II, for example, had a large defense wall built across the Isthmus of Corinth, the so-called Hexamilia or Six-mile wall. Large parts of this can still be seen, something that is partly due to the many restorations from later centuries.

The image on the right (source: wikipedia) shows the exact location of the Hexamilia.