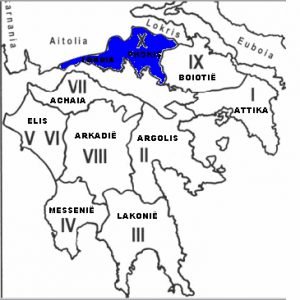 The Phocis region in Greece is actually split in two. The most important in early antiquity was the watershed of the Kephisos River, which contained many important cities. Second came the plain at the foot of the Parnassos Mountains with the main cities of Delphi, Kirra and Daulis. The settlements in the Kephisos plain were originally culturally focused on Thessaly, but later more strongly on southern Greece. The Homeric ship catalogue has 9 cities in Phocis, Herodotus lists 15 cities around the year 480, while the (Hellenistic) Aitolian League had 22 members.
The regions of Locris, Malis and Doris are not systematically mentioned by Pausanias. From Locris, Pausanias only discusses Amphissa and he skips Naupaktos, Malis and Doris. It is unclear whether work was lost, or whether Pausanias later renounced to treat all of Greece.