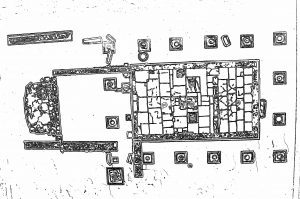 The sanctuary of Apollo Zoster was excavated in 1926-1927 and is located at the popular beach resort of Vouliagmeni near Athens. The temple founded in the pre-Classic period, has a simple structure, 11 x 6 meters. The bottom inside was covered with slabs of marble, an altar was found in front of the templeat a distance of 6.75 m. Quite some time after the original construction, the temple was surrounded by an arcade, which gave it the appearance of a peristyle temple with 4 x 6 columns. Inscriptions indicate that the shrine was under  the responsibility of the deme Halai Aixonides. Today, the excavation site is located in the middle of a luxury holiday resort, however, it is accessible without paying. At a short distance from the actual temple you can see (meager) remains of the priest’s house that belonged to the temple (immediately to the right of this text)

The sanctuary was situated in the deme Aixone, near the town of Halae Aixonides. According to an antique commentary on Aristophanes (Lysistrate 808-15), the famous man-hater Timon of Athens was buried here on a cape on the coast, whom Pausanias indicates had lived near Plato’s Academy. Plutarch and Lucian, in particular, have served as a source for Shakespeare when writing his Timon of Athens. The town also served as a backdrop for Terentius’ comedy heautontimoroumenos, “the Self-Tormentor,” in which two farming families are central.

Pausanias’ (erroneous) explanation of the name of Apollo Zoster is based on a speech by the orator Hyperides, who wanted to enforce the Athenian claim on the island of Delos by creating a mythical connection with the island: where the goddess Leto (as known ) gave birth to her children Apollo and Artemis on Delos, she is said to have already loosened her belt at Zoster. In reality, Apollo was worshiped here as a god of war, who protected warriors by putting on armor. The name must therefore mean the “Omgorder”.

Most photos are clickable to enlarge. 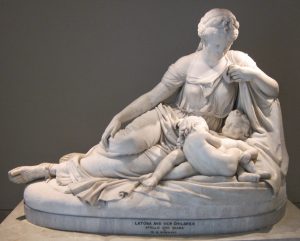 Officially, Zeus was married to Hera, his sister, but Zeus was not very concerned with the marital rules. He regularly had affairs, including one with Leto, a daughter of the Titan Koios. Once Leto was pregnant, Zeus caught the wrath of his wife Hera. He announced that she would curse anyone who would help Leto with the delivery.
Because this threat from the goddess Hera made a big impression, Leto was forced to make many wanderings. After many months, Leto reached the island of Delos, which was not anchored to the sea ed at the time, but was bobbing poorly. This island was so poor that no threat could harm it further. A nymph gave Leto shelter in exchange for a sanctuary on the island. This should be founded by the son who would give birth to Leto.

But her problems were not over with this. Hera kept the goddess of childbirth busy during Leto’s contractions. Because of this, Leto had labor contractions for nine days. Only after this did Eileithuia learn about Leto’s distress and she rushed to Delos. With her help, Leto, clinging to a palm tree, gave birth to Apollo and Artemis. The palm tree was revered for a long time on the island of Delos, which would become the most important center of the Apollo cult.