Eleusis, by far the most respected sanctuary of Attica in ancient times, formed the background for the so-called Eleusinian Mysteries, the worship of the goddess Demeter and her daughter Kore. According to Eleusinian mythology, Demeter had searched for her lost daughter Kore at the well of Eleusis. This well was located just outside the wall of the sanctuary, which shielded the actual Holy Court from the outside world. Also outside the enclosure wall was a temple dedicated to Artemis Propylaea (“before the gate”) and a second temple dedicated to Poseidon, located on a spacious marble-clad square. Here the mystai gathered to undergo the cleansing rites which were mandatory before entering the sanctuary itself. Left and right, the entrance to the main square was “bordered” with two Roman triumphal gates, of which considerable remains have been preserved.

Access to the Holy Court itself was reserved for those initiated into the Mysteries, and passed through the Great Propylaea, a gateway with six enormous Doric columns (two of which are against the modern enclosure), adorned with a portrait bust of the Emperor Marcus Aurelius, who had the sanctuary redone after the havoc left by the marauding Germanic hordes of the Costobokes. The Great Propylaea are essentially a copy of the propylaea of the Acropolis in Athens.
The numerous renovations in the sanctuary are clearly visible on the map on the right (photo from museum). 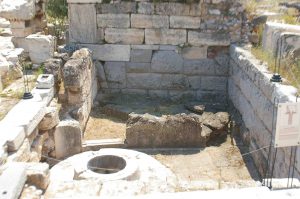 Even before the first propylon, the pilgrim first came to the Sacred Well Kallichoron, where the goddess Demeter was said to have sat. Incidentally, it is very likely that this well, designated by Pausanias as “the” Sacred Well, should actually be sought elsewhere.

Left and right, reconstruction and ruins of the “Triumphal Arches”, exact copies of Hadrian’s Arch in Athens.

Rebuilt under Emperor Marcus Aurelius after the destruction wrought by the barbarian Costobokea, were designed to replicate the propylaea of the Acropolis in Athens. A large tondo shows the portrait of Marcus Aurelius.

Behind the Great Propylaea, the pilgrim came to the so-called Small Propylaea, a gift to the goddesses by Appius Pulcher during his consulate in 54 BC. On the outside stood several meters high Corinthian columns, while on the inside the gates were flanked by Caryatids. Behind this was the actual Holy Court of Demeter, with the so-called Ploutonion (3) (photo below right) on the right, a triangular Court containing a cave dedicated to Hades (Plouto), the remains of a treasure house and a temple, and behind a series of steps the square with the Telesterion, the very heart of the sanctuary.

The actual Telesterion consisted of a large rectangular hall, with benches on all four sides, partly carved into the rocks, intersected by a number of doors. Exactly 42 columns carried the wooden roof, while in the center of this hall lay the Holiest of the Holy (the Anaktoron), a small rectangular room, within which mysterious rituals took place.

The actual city of Eleusis, “where the brave Keleos commanded” is directly adjacent to the sanctuary, which was included into the fortifications by an extension of the city walls. Originally an independent city, Eleusis was annexed to the city of Athens at a very early (according to the myth by Erechtheus), although the celebration of the Mysteries continued by her own priests. Remains of the walls of the city can still be found in many places, especially around the sanctuary. Click on the map for an enlargement (taken from Papachatzis volume 1 p. 474.