Delphi – The enormous amount of very complete guides from Delphi make a complete revieuw of this sanctuary unnecessary. That is why only the most important buildings are imentioned here, more or less according to  the route of Pausanias. Being discussed are:

In the lower city, where several temples have been located, the following building complexes can be distinguished. The Sanctuary of Athena Pronaia (or Pronoia) – The ancient temple of Athena Pronaia was a 5th century temple that was damaged by avalanches in 480 B.C. for which the Persians  fled. Only three pilars of this temple have been (partly) preserved. 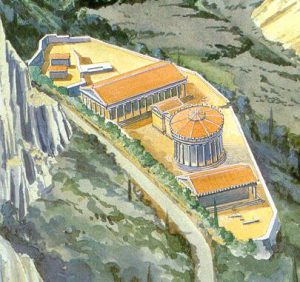 Two treasuries were next to it, then the (now) most famous building of Delphi, the (in 1938) heavily restored tholos (or rotunda) from the 4th century (which is ignored by Pausanias and probably already destroyed in its time). Around the cella was a colonnade of 20 slim Doric columns, standing on a platform of 3 steps, while the inside was decorated with Ionic semi-columns. Fragments of the construction are visible in the museum. The new temple for Athena Pronaia was built after 360 B.C. erected, a sober building with six Doric columns at the front

To the NW of this temple are the remains of the gymnasium, with on the north side on the highest terrace a covered colonnade where the athletes could train during bad weather, while on the lower terrace the remains of the wrestling arena (palaestra), a Court surrounded by colonnades on four sides, and next to it the baths, a large round bath (cold) and a number of showers situated against the northern supporting wall.

Then, walking back towards the archaeological park, we pass the remains of the ancient Castalian spring, where all the visitors to the Games or the sanctuary stopped to drink and wash. At this spring the Pythia (high priestess and fortune teller of Apollo) and the other priests also had to ritually purify themselves before they could deliver oracles. Most worth seeing is a rectangular basin, cut into the rocks, measuring 3 x 9 meters with an elongated reservoir next to it in which the water from the spring was collected, before it ran out through seven bronze taps with lion heads. This monument dates from the Hellenistic or Roman period, a time in which the Castalian spring also returns metonymically in Roman poetry as “poetic inspiration”. Several niches cut into the rock wall were used to display the pilgrims votif gifts. An older, archaic springhouse has also been found. Unfortunately, it is not always possible to visit the (remains of) the two springhouses.