Sparta, the capital of Laconia and (after Athens) the most important city of Greek antiquity, offers a modern visitor little antiquities of interest. In its most powerful period the city had no city walls, because the Spartans felt that the city was better defended by the bravery of its men than by stones. Only in the 3rd century BC. the city center was surrounded by a wall and Sparta became a “normal” Hellenistic city with accompanying administrative buildings, theaters and temples. Despite its walls, the city was  destroyed by the Goths in 396 AD. During the invasion of the Slavs in the 9th century, the city was abandoned, the population having fled to the Mani. With the construction of Mystras in 1248, the city disappeared from the map. However, in 1834, King Otto commissioned the Bavarian neo-classical architect Fr. Stauffer to design a new Sparta, after which the city grew rapidly from 130 inhabitants in 1840 (from Mystras!) to 18,025 in 2001. The archaeological museum of Sparta contains many extremely interesting finds, including from the sanctuary of Artemis Orthia. 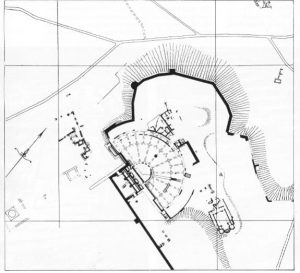 The Roman theater is beautiful, together with that of Megalopolis one of the largest theaters in Greece. The cavea could seat around 16,000 people. The stage itself (the skènè) was made of wood in the oldest (Hellenistic) construction phase and could be driven off to the right in its entirety. A permanent stone theater building was built in the 1st century AD. built and rebuilt several times (up to the 4th century), until the stage building with its enormous splendid façade could compete with the best Roman theaters in the Mediterranean. The eastern retaining wall of the cavea contains inscriptions with long lists of 2nd century magistrates. The theater, like several other buildings, bears witness to the flourishing of Roman Sparta.
On the right the acropolis of Sparta with the great theater and to the east of it the foundations of the basilica for Christ the Savior from the 10th century AD.

Above: from left to right the cavea of the theater, the eastern retaining wall, below it a detail of the rich decoration and the Hellenistic mobile skènè.

Leonidaion (Temple of Apollo Karneios?) A large temple-shaped monument in the middle of the modern city of Sparta is popularly called the Leonidaion, or the Tomb of Leonidas, after the famous king of Sparta who died with all his men at Thermopylai in the fight against the invading Persians. Despite this designation, there is no evidence that connects the building to this Spartan king. It is a large 5th century building (12.5 x 8.3 m.), built of large blocks of stone, divided into 2 rooms, the eastern one of which was 3.15 m. The building should most likely be interpreted as a temple, and is therefore identified by some with the temple of Apollo Karneios mentioned by Pausanias.

The temple of Artemis Orthia

The temple of Artemis Orthia was best known in classical and Roman times as the place where the Spartan boys were brutally beaten with long whips in an endurance test. The sanctuary seems to have existed since the 10th century  B.C. and in archaic times consisted only of a walled sacred domain with an altar in the east and a small temple in the west. The wooden temple built in 700 B.C. was destroyed around 570 B.C. and replaced by a stone one, with two lions facing each other in the pediment. The complex was renovated in Roman times (2nd century), with a kind of theater that offered visitors a good view on the bloody rituals. In older times, the worship may have been less cruel. A proper explanation for the name of Artemis Orthia has not yet been found, despite Pausanias, who maintains that it must simply be the “upright” Artemis, because the cult statue had been found by the Dorians, trapped (upright) in the undergrowth. The (very small) wooden cult statue was, according to Pausanias, the one that was stolen by Orestes and Pylades in Tauris. It appears that the goddess was originally mainly related to fertility, growth and harvest, while identification with Artemis was only made later.
The many offerings that have been recovered during the excavations (exhibited in the museum of Sparta) shed some light on the cult. A large number of 7th and 6th century clay masks have been found, depicting old people, but also warriors, young people, satyrs, gorgons and caricatures (grotesque heads). These masks often lack eyes and have therefore have not been used, but may be earthenware replicas of masks worn during dances in honor of the goddess. In addition, dozens of bronze figurines of gods, warriors, animals and mythological creatures have been found. Inscriptions about the winners in games in honor of the goddess date from Hellenistic and Roman times, often with a hole for a bronze sickle, the prize for the victor. The sickles are an indication of the original content of the cult, while the inscriptions provide many important clues about the organization of the games.

Top right: the (scanty) remains of the sanctuary of Artemis Orthia and a reconstruction of it. Underneath a clay mask as an offering to Artemis Orthia.