Asklepios is the Greek god of medicine. In mythology he was the son of Apollo and the Thessalian king’s daughter Koronis. His mother died during delivery. He was suckled by a goat. The centaur Chiron educated him and taught him medicine. He could not only heal the sick but even bring the dead back to life. Zeus was so envious of this that he killed him with his lightning. In the Asclepioscult he was a deity who was worshiped in the form of a snake. Towards the end of the 6th century BC. the cult of the Thessalian Trikka was transferred to Epidauros and rose to unprecedented height in the 4th century. From far and wide the sick came to the divine healer for healing. They were put to sleep in the temple. The god appeared to them in sleep to heal them. It could also be that he appeared to them in a vision to give them the right medicine. Buildings for the pilgrims were created around the temple. Many poems testified of grateful believers. From Epidauros the cult spread over the Old World. In the sanctuary of the island of Kos, medicine was practiced scientifically at the school of Hippocrates. Asklepios was later brought to Rome where he was honored as Aesculapius. Staff and snake (esculape) have been the international symbols for the medical professions since ancient times.

With the mention of the cult image, Pausanias makes a start with his description of the great sanctuary for Asklepios. The entire site is a “sacred forest”, so a site dedicated to Asklepios that originally had countless trees. (Remnants of) several buildings can be viewed on the site:
A – B – C temple complex of Asclepios G katagogeion (hotel)
D The temple of Artemis                       H theatre
E gymnasium odeion
F stadium

Asclepiostemple. This temple is from the 4th century and was a Doric peripteros, i.e. a temple with a row of columns (6 x 11) of tuff on all sides and partly clad in marble. Only meager remains of this temple remain, although important remains of the fronton sculptures in particular still remain, which occupy a prominent position in the NAM in Athens. The gold and ivory statue of Asclepios (described by Pausanias) has been lost. Before the temple was the big altar. 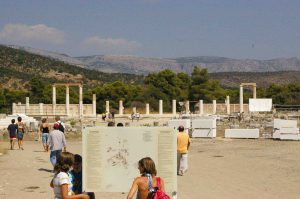 The enkoimeterion, the “place where the supplicants sleep” is the very heart of the sanctuary. Here sick and disabled people went to sleep hoping for a dream in which Asklepios himself (or his sacred snakes) appeared to them for miraculous healing to bring. The aerial photo above clearly shows that extensive reconstruction work is being carried out. The enkoimeterion is the stoa-like building behind the temple. On the left on the photo reconstruction work on the tholos. Reconstruction: http://www.sciencemuseum.org.uk/hommedia.ashx?id=10885&size=Large

The center of the sanctuary was formed by a Tholos from the 4th century, just like the temple around 360 BC. built by Polykleitos. This was a round sanctuary consisting of a cella surrounded by Doric columns with a wreath of Corinthian columns inside. Plant motifs were applied to the cassette ceiling. The floor was covered with black and white plates. Below it was a network of corridors with the abode of the holy snakes.

Comprehensive restoration works should give the visitor some impression of this building, but before this work is completed only a reconstruction can give it some impression.

Gymnasion party room. The building dates from 280 BC, and consists of a square peristyle garden with 16 columns per side. A huge propylon was later added as an entrance on the north side. The north side consisted of a long internal colonnade, behind which a rectangular gym for the youth with a rectangular exedra as a sanctuary. On the south side was a huge colonnade with two rooms on each side, which probably served as a dining room. Also on the east and west side a few rooms and two colonnade, the eastern one again serving as a dining room.

The Romans built an Odeion in the central court, a small theater for singing and declamation. The propylon was converted into a small temple, probably dedicated to Hygeia, the daughter of Asklepios.

Bathhouse. A Greek bathhouse directly behind the high school banquet dates from the Hellenistic period. The bathhouse (originally two floors) had a large rectangular courtyard, which was surrounded on three sides by rectangular spaces with bathtubs, basins and drainage channels.

Palaestra. This square building was the school for the wrestlers. There were classrooms on three sides and on the fourth side was a stoa, a colonnade.

Photos: the remains of the gymnasium and the reconstruction of the propylon.

Theatre. The theatre, like all Greek theatres built on the slope, is very well preserved and has fabulous acoustics. It was built in the 3rd century. Originally there were 34 limestone rows with seats and they were divided into 12 sectors. Later 21 more rows were added. It can hold 12,000 spectators. The guests of honor sat in the first row, their seats had backrests. The floor of the orchestra (the dance place for the choir) was made of tamped clay, was walled low and the altar of Dionysos stood in the middle. There were two entrances, the western one has been rebuilt. The skènè used to be a tent where theater performances were given, later a theater building made of wood. Little is left of this skènè, because there is regularly a (modern) wooden floor over the remains in connection with performances in the theatre. The image (to be enlarged) shows the theater after the Hellenistic renovation and expansion.

Katagogeion. The fame of Asklepios as a healer god was so great that a large hotel, the katagogeion, was built to house the pilgrims (who did not all fit into the enkoimeter ion at the same time). This large square building is the guesthouse for the countless pilgrims. It dates from the 4th century. There were four courtyards surrounded by Doric columns and 18 rooms on two floors.

Artemis temple and Themis temple. The Asklepios sanctuary also included an Artemis temple dedicated to Artemis (Diana), the goddess of the hunt and the forest, Apollo’s twin sister. Apollo was the god of wisdom and the fine arts. Themis was the daughter of Ouranos (“heaven”), father of the Cyclopses and the twelve Titans.
There are also remains of a Greek bathhouse, library and thermal complex, an elongated stoa from the 3rd century, a stadium with a length of 196 m. And a width of 23 m., The remains of an Aphrodite temple, and a Christian basilica. Photos: remains of katagogeion and stadium.

Museum. The museum contains numerous finds from the site. Room 1 contains, among other things, an inscription on which the costs of the construction of the Asclepios temple and the Tholos are mentioned, a collection of medical instruments made of bronze, and inscriptions that tell stories about healing the sick such as infertility, tapeworm, eye renal and biliary disorders. Room 2 contains images of Asclepios and also of Hygieia; the beams of the propylon (gatehouse or hall) of the gymnasion and the akroterion of the temple. Room 3: parts of sculptures from the Asclepios temple, a reconstruction of the Asclepios temple and of the Tholos and cassette ceiling and door frame of the Tholos.