Aigina has been inhabited from 3000 B.C. Around 2000 B.C. The original population is replaced by Greek speaking tribes and the history of Aegina follows a parallel course to that of most Mycenaean kingdoms. According to mythology, king Aiakos had three sons. The princes Telamon and Peleus, however, had to leave the island after the murder of their half-brother Phokos. Aiakos was considered extremely beloved by the gods: when Greece threatened to become uninhabitable because of a severe and longlasting draught, his prayers to Zeus Panhellenios (of All Greeks) made it rain. The sanctuary of Zeus Panhellenios can still be found on a mountain top on Aigina. After his death Aiakos became one of the three mythical judges in the underworld. He was buried in a heroön on Aigina and was revered as a heros. Before the battle of Salamis against the Persians, the Athenians made sure he would support them  by transporting his bones from Aigina to Athens. When Mycenaean civilisation disappeared, Aigina was left uninhabited for perhaps 200 years. Afterwards it was colonized from Epidauros. The island then reached a high level of prosperity as a commercial centre, even equalling the wealth and power of Athens. In the battle of Salamis against the Persians, the Aeginetan marine played an important role. During the Peloponnesian wars, the Athenians deported the population of Aegina (loyal allies of Sparta) and planted a military colony. In 404 the Spartans restored the original population to their homes, but the island never regained its former prosperity. In Hellenistic times it was at first controlled by the Macedonians, but later by king Attalos of Pergamon. In the middle ages, raids by Arabian pirates forced the inhabitants to build themselves a new city 6 km. of the coast (Palaiochora, twice rebuild, first after being destroyed by the Turks in 1537 and later by the Venetians in 1654), where you may still find the remains of some 20 churches and a small castle.

The temple of Apollo nowadays is identified with the – fragmentary – temple on the acropolis of Aegina. Of this temple, which has a base of 34.6 x19.13 metre, only one column remains standing. It dates from ca. 520-510 B.C. And once had 6 x 11 columns. All around, but also under the temple’s foundations lie remains of a once prospering prehistoric settlement. West of the temple lie remains of two other temples, probably those of Artemis and Dionysos which are mentioned by Pausanias. The acropolis can be reached by way of the gardens of the archaeological museum, which is in itself worth a visit. It harbors – apart from archaic and classical finds – a fine collection of prehistoric material.

The temple of Aphaia, lying at some 12 km. from the modern city of Aigina, is one of the best preserved temples of Greece. It dates from around 500 B.C. The pedimental sculptures were discovered by the English architect Charles Cockerell and brought first to Zakynthos and afterwards to Italy. Forced by a lack of funds, he sold the many fragments, which were bought by the German monarch Ludwig of Bavaria, who had them restored and brought to Munich, where they may still be admired. A close study of the statues brought to light many fragments of the paint with which they had been painted, making an exact polychrome reconstruction possible.

Only in 1901 the temple was investigated thoroughly, in the process of which it became clear that the deity to whom it was dedicated was Athena (Aphaia). Before that time (also on account of Pausanias not so clear description of its location) the temple had been identified with that of Zeus Panhellenios. The cult of Aphaia (or Apha) may have existed on this location from Mycenaean times onwards. At the north-east corner, just outside the enclosed terrain a cave was found with numerous terracotta statues and other small finds dating from the Mycenaean period. As becomes clear from the central position of the goddess Athena in both pediments, the Aiginetans at some time identified their own goddess Aphaia with the famous Olympian goddess. The pediments show two different trojan wars, the first led by Heracles, the second by Agamemnon.

Of the pediments of the temple so many fragments have been preserved, that it is possible to make a virtually complete reconstruction.  The eastern pediment (above) shows the “first” Trojan war, with Heracles (no. 11) clad in his lionskin and armed with bow and arrows. On the western pediment we see the second Trojan war, with prince Paris as the most prominent figure (no. 4), who wears his traditional “Phrygian cap” as well as narrow fitting trousers on aan zijn benen een nauwsluitende broek.  Both elements serve to identify Paris as a barbarian.  Below the pediments you see a reconstruction of the front of the temple and a detail of Heracles..

Left: some photo’s of the pediments of the temple exhibited in Munich. Left prince Paris. In the middle the goddess Athena-Aphaia who controls the battle in the same way as Apollo in the pediment of Olympia. That the preserved pediments were not made in the same period can be seen by comparing some of the details. The face of Paris shows  the characteristic “archaic smile” of the older sculpture, while the dying warrior to the right has lost his appetite for smiling

The colored archer (on the basis of minute paint remnants) reminds us once again that Greek sculpture (and architecture) was always colorfully painted.

In the center of Aegina is a shrine that was considered in ancient times to be perhaps the most important of the island. It is said to have been founded by the mythical ancestor of the island, Aiakos, a son of Zeus by the river nymph Aegina, after whom the island is named. It was like this:

It was once so long, so dry in Greece that the Greeks asked the oracle in Delphi for help. That advised them to have Aiakos make a plea to Zeus, because Zeus would listen to his son, who was known for his piety. All the Greek nations sent envoys to Aiakos to persuade him to offer that help. Aiakos climbed the highest mountain on the island, built an altar there for Zeus Hellanios and begged him to end the drought. Zeus was indeed listening, and Greece was saved. On top of this mountain is now a small chapel, from which you have a magnificent view over the island, but at the foot of the mountain lie the remains of a much larger sanctuary for Zeus Hellanios, consisting of a temple (of which only the foundations remain) and a large colonnade (stoa), the foundations of which are also recognizable with some difficulty. The whole is on top of a very impressive platform, accessible via a staircase. Especially the latter is definitely worth it. As is often the case, a church has been erected by the Byzantines on the foundations of the Zeus temple, probably to ward off the evil influence of the ancient gods.

Photos above: the Profitis Iliad, on which the altar for Zeus once lay. Photos on the right and below, the platform with church and remains of the ancient shrine. 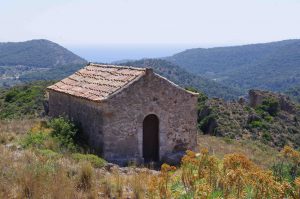 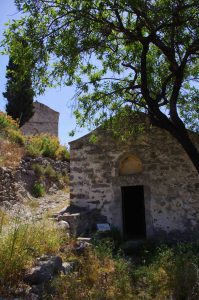 Death (Koimisi) of the Virgin

The medieval town of Palaiochora was founded in 896 in an attempt to keep the islanders out of sight of the Saracen pirates who terrorized the Mediterranean, and remained inhabited until about 1800 when the last inhabitants moved back to the coast. The town has nevertheless been attacked and destroyed several times. In 1537, the town was conquered by Barbarossa, who plundered the churches, but the Franks, Venetians and Turks also kept their homes there. When the town was abandoned there were about 300-400 houses inhabited. These have now largely collapsed, but there are still 38 churches, many of which still have frescoes, dating from the 13th to the 18th centuries. The Venetians have built a fort on top of the hill, with 6 cisterns, 60 houses and a double church (photo below right). Little remains of the walls of the fort. However, many of the churches have been beautifully preserved, such as the Aghios Georgios the Catholic, the Bishop’s church Aghios Dionysios, next to which is the cell where the saint spent a large part of his life, and the monastery of Aghia Kyriaki (Holy Sunday), a double basilica with very beautiful murals, which until 1800 was the center of the village (right). 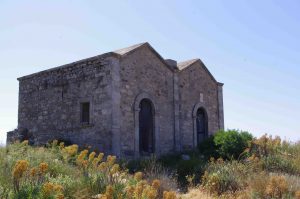 Below: the double church of Saints Georgios and Dimitrios