The Temenos (court) of Apollo is formed by a mess of monuments. However, with the text by Pausanias, a good reconstruction (source: Papachatzis) and the finds in the museum, it is still possible to ihave a good image of the court.

Of the treasure houses in Delphi, which were used to house the votive offerings of the cities that also had that treasure houses built, is that of the Athenians (right), built around 490 B.C. the most famous. The treasury of the Knidians (left) is rather poorly preserved. From the treasure house of the Siphnians (around 525, reconstruction below) large parts of the (Ionic) frieze have been preserved, which can be seen in the museum in Delphi. This beautifully detailed archaic frieze is already worth a visit to the museum. Sufficient fragments of the treasure house (including the Karyatids) have been preserved to get a complete reconstruction of the facade. Some pictures of the frieze are shown below.

Left: Three goddesses are awaiting  the outcome of the  duel at the gates of Troy. Middle: battle between the gods and giants; two lions pulling the chariot from Artemis, bravely fight along. Right: Apollo and Herakles compete for possession of Delphi’s holy tripod; in the middle the god Zeus, who intervenes in the event.

The museum also contains horse-riding Amazons, which have stood on the corners of the roof (a reference to Theseus’ defense of Athens against an invasion of the Amazons) and the remains of the pediment sculptures, all in a beautiful archaic design.

Colonnade of the Athenians and stone of Herophile (15 + 18)

According to Pausanias, the Stone of Herophile was used by one of the Sybilles as a “stage” to announce her predictions.

The colonnade of the Athenians.

The letters of the inscription on the colonnade have an archaic design and date from about 500 B.C. The colonnade must therefore be much older than Pausanias thinks, founded after a famous Athenian victory over the Boiotians in 507 (compare Herodotos 5.77), or after the naval battle at Salamis in 480. The loot of the Peloponnesian wars is placed later. The inscription reads:

The Athenians put down this colonnade and the weapons and the

boat decorations which they have taken from the enemies.

The Big Temple of Apollo at Delphi is currently believed to be the most photographed object in the entire sanctuary. The temple is located on the north side directly on the rock bottom, but on the south side (due to the steeply sloping terrain) on a platform of irregularly worked stones with a total height of 4.60 m. The temple had 6 x 15 stucco-covered columns.  A wooden temple from the 7th century B.C., which was destroyed in a fire in 548 B.C., was first located in the same place. In the same place was also a large archaic temple, built between 530 and 505 BC, which was extensively admired by Aischylos, Euripides and Pindaros. Numerous fragments of this temple have been found, including (partly) also the facade sculptures, which can now be admired in the local museum. Pausanias mentions some earlier mythical temples on others spots on the site.The current temple, built after the destruction of the archaic temple in 373 B.C. was built between 366 and 329 by Xenodoros and Agathon, in 88 B.C. set on fire by barbarians from Thrakia and then further defaced by the Roman general Sulla, and restored by emperor Domitian. It is in this embodiment that the temple was seen and described by Pausanias. He mentions gilded shields hung on the sides and fronts of the temple (loot from the Athenians in battle with the Persians at Marathon and later from the battle with the Celts), and gives a brief description of the pediment sculptures (on one side Artemis, Leto, Apollo and the Muses, on the other Dionysos with his followers, the Thyiaden) who have been preserved very fragmentary.

Particularly interesting are the remains of some of the many votive offerings that have been preserved for the temple, or, as Plataia’s serpentine column, have been ‘reconstructed’ from scratch. For this monument (and some others), that the battle of Plataia against the invaded Persians from 479 BC. had to recall., see also the page ‘some votive gifts’. 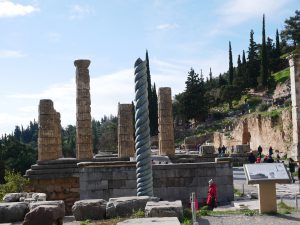 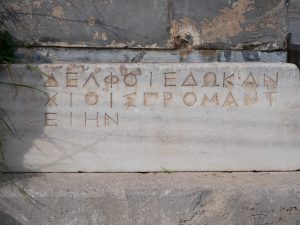 The great altar to Apollo, funded by the inhabitants of the island of Chios, gave them the right to always go first to consult the oracle of Apollo, as the text on the altar shows: “The Delphians have given the people of Chios the right of the first oracle. “

Special, but only as a pedestal in front of the temple is the Monument of the Dancers, on top (a copy) of the famous ‘omfalos’, the ‘Navel of the World’ that stood in Delphi and indicated the exact center of the world

Right: The theatre of Delphi, place for the musical parts of the Pythian Games. According to good Greek custom, this theatre is built half against and half in the mountainside. Originally laid out in the 4th century B.C., the current form (in marble) of the theater is performed  by Herodes Atticus around 160 A.D. The front of the (now disappeared) stage was decorated with a frieze depicting Heracles’ exploits. The remains of the frieze can now be seen in the museum.

From left to right: Herakles engages Kerberos, the Hydra, Herakles and Nessos

The stadium: The stadium was built in the fifth century B.C. At first the spectators sat on the ground, but in the Roman period rows of seats were built at the expense of Herodes Atticus, on the north side (carved into the rocks) 13 “steps” high, on the south side (supported by masonry ) 3 “stairs”. In total, the stadium offered space to about 7000 spectators. In the entrance were four pillars, the two middle ones had niches for statues. Athletes and referees entered through the gates between the pillars. The stadium is 187 meters long, the racecourse itself 177.55 meters, the width is 25.5 meters. Plastered stripes on the ground indicated the start and the end. At the start there are holes in the ground, where the runners put their feet. In the middle of the north side were long benches with armrests, the places of honor for referees. In a corner at the top of the stadium was a well for drinking.

Right: access to the source. Below: the start (with the starting line) and twice the stadium, photographed from both sides.