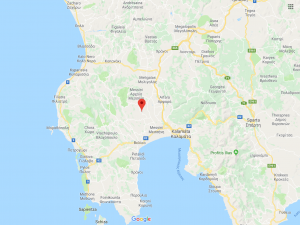 The sleepy town of Androusa, nowadays hardly more than a village, was one of the most important centers of the Peloponnese in the Middle Ages. The town was not part of the first twelve baronies of the principality of Achaia, but became its capital for a short time in the 14th century. The Frankish knight William de Villehardouin founded the castle of Androusa around 1250. The castle was taken in 1381 by the mercenaries of the Company of Navarro, who had destroyed the entire Frankish aristocracy of Greece in the Greek ‘Battle of the Golden Spurs’. In 1417 the last Byzantine rulers, the Palaeologists, conquered the castle, from whom the Turks conquered the castle in 1467.

Androusa Castle was once quite large, but the setting is not very spectacular. The most important remains are formed by a wall section of about 50 meters in length, with arcades in it. The towers are uneven in shape, rectangular, hexagonal and round, as in specific Byzantine castles. This fact, plus its not very strong location, makes it somewhat likely that Androusa was originally a Byzantine fortress.

A 12th century church is now used as a burial chapel. The building is not decorated on the inside, the outside is interesting because of the brick decoration.