The Argive Heraion, rediscovered by general Thomas Gordon in 1831, was excavated in 1892-1895 by Waldstein and later by Blegen (1925-1928) and Caskey (1949). According to Greek mythology this was the sanctuary were Agamemnon was designated as the leader during the Trojan expedition. This was also the sanctuary whereto Kleobis and Biton hauled their mother when the cartoxen were’nt in time. The archaic and classical remains lay on three separate levels. On the highest level can be seen the remains of the stylobate of the oldest (Doric) temple, constructed of wood and  unbaked clay, dating to the 7th century B.C.
After the fire in the 5th century B.C. (see Pausanias 2.17.7) the architect Eupolemos from Argos built a new temple, the remains of which can be found on the middle level. This temple is described by Pausanias, with its large cultstatue by Polykleitos, made of ivory and gold. It represented a sitting Hera, with in one hand a pomegranate and in her other hand a scepter.
The entrance to the terrain is free, but only a very few tourists take the trouble to go there, which is unfortunate, as the site is well worth a visit.

THE CULT-IMAGE IN THE HERAION

“The cult image of Hera sits on a throne: it is of an impressive size, made of gold and ivory and a work of art by Polykleitos. She has a wreath on her head showing the Graces and the Horai in relief. In her one hand she holds a pomegranate and in her other hand a scepter. I do not want to deal with the history of that pomegranate, because that myth is strictly secret. There is a cuckoo on the scepter, they say, because Zeus, when he had fallen in love with the still virgin Hera, had turned himself into that bird and had captured him as a toy. I write this story and other similar stories about the gods, although I don’t believe it.”  Pausanias 2.17.4 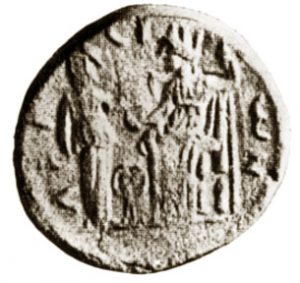 The gold-with-ivory cult statue of the goddess Hera in the Heraion a few kilometers away from the city of Argos is surrounded by secrets. There is a story attached to both the pomegranate and the cuckoo. Now, with Pausanias, this generally means a “mystery”, a cult service exclusively for initiates. The pomegranate is here a sign on the wall: where “mystery services” generally promised their followers a “life after death”, a “resurrection”, or at least a more pleasant existence in the underworld, the pomegranate is through the myth van Demeter and Kore are inextricably linked to death. After all, Hades had kidnapped his young bride into the underworld with violence and against her will. It was only when her mother Demeter made enough trouble to force Zeus to ban the strike, that Hades gave her back, but not until he had tempted her to eat some pomegranate seeds. Hades then argued with Zeus that Kore had not really stayed involuntarily with him, given that she had accepted a meal. Zeus tacked, and from that moment on Kore – as Persephone – spent as many months a year in the underworld as she had eaten pomegranate seeds. At the same time, Demeter lets nature devour, making it winter, and only with the return of Kore to Earth does spring unfold. The pomegranate can be seen as a secret weapon of Hades, but can at the same time symbolize a return after death, a pleasant thought. Admittedly, such a role is not known from Hera, but it is not entirely unlikely either.

This interpretation of the pomegranate of Hera can be supported by some burial paintings in the Greek colony of Posidonia in Italy, which after the conquest by Lucanians went through life as Paestum. That the city flourished as a Greek city can be seen from the three Greek temples that the city is still rich. The tomb paintings rather betray Italian influences, insofar as we see corpses in honor of the dead, including (non-Greek) also gladiator fights. These scenes are decorated with countless pomegranates!