The city of Phlious (accessible from Kiato via the village of Titane) was a thriving city in ancient times, situated on one of the larger plains of the Corinthian interior. The acropolis was situated on a fairly low hill, which is almost 60 meters above the plain, directly east of the river Asopos. The top of the hill was reinforced, as can be seen from the scarce remains of a wall. The main visible remains are the lower parts of a theater, with some remains of the stage and almost adjacent a large building with a peristyle courtyard (now known as “palace.” Higher up the hill you can still find antique material, reused in the church in front of the Panayia The most striking and at least most recognizable element of the “palace” is the row of column bases of the inner court, and the theater can only be recognized with fantasy. 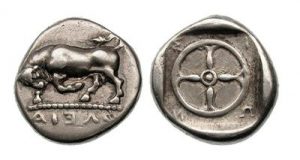 In its propaganda, Phlious focused strongly on the Zeus sanctuary of nearby Nemea, as can be seen on almost all his classic coins, which always have a bull on it, bending forward as a sacrifice to Zeus and accepting the inevitable. On the reverse side a wheel as a symbol for its trade routes over land.

Where it could hardly boast a great past, Phlious has made a reasonably successful claim to the mythical history of other states and peoples. In one attempt, brilliantly propagated by the Greek poet Bacchylides (about 520 – 450 BC), Ajax and Achilles – almost the greatest heroes of Trojan history – are claimed for Phlious. Zeus, according to a well-known myth, had robbed the nymph Aegina, a daughter of the river god Asopos, and took her to an uninhabited island, where he slept with her and she became pregnant. Her son Aiakos grew up prosperously, but because he felt lonely, he asked Zeus to turn the countless ants of the island into people. So it happened, and Aiakos was hereafter the ruler of the Ant people, the Myrmidons. Peleus and Telamon are from Aiakos, of whom Peleus would have many adventures. For example, together with Heracles, he conquered the city of Troy for the first time, but he would also marry the sea goddess Thetis, with whom he fathered Achilles, the most powerful Greek for Troy. Telamon became the father of Ajax, the second most powerful Greek for Troy. By hammering on the fame of Ajax and Achilles, who ultimately descended from the river Asopos, Phlious could bathe in the glory of those heroes. A pity that the Asopos River also flowed at Thebes!