The ancient Nemea (with Mount Apesas in the background) was important in ancient times because of the famous myth of Herakles and the Nemean Lion, but especially because of the Nemean Games that were held there every 2 years in the summer. These games, first held in 573 BC, were the fourth panhellenic festival after the games in Olympia, Delphi and on the Isthmos. The organization of the games was initially reserved for the town of Kleonai, but was later taken over by Argos, which took over the Games after Spartan troops destroyed the sanctuary and the archaic temple during the Peloponnesian war. Around 330 before Chr. Philippos of Macedonia had the current temple built and the Games of Argos moved back to the great Zeus sanctuary. In the Hellenistic era, the Nemean Games also had music competitions, in addition to the athletic components and the horse races. The antique stadium was the center of the games and was – together with the impressive remains of the Doric temple (330-320 BC) – converted into an archaeological park in 1994 with the support of the Americans. 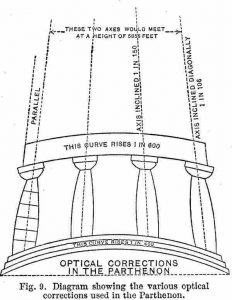 The site was especially after the destruction of Corinth by the Roman General Mummius in 146 BC. seriously neglected and used less and less. By the time of Pausanias, the stadium was already overgrown and used as pasture, while the roof of the temple had collapsed. A cult image was also no longer present. An early Christian basilica was built over the remains of antique houses and hotels in the fourth century, but after excavating much of its building material, it is difficult to recognize. The typical apse can be seen on an aerial photo.

The Games are said to have started as funeral games for Opheltes, the baby of the mythical king of Nemea Lycurgus: When the army of the “seven against Thebes” arrived under Adrastos at Nemea and asked for water, the nurse Hypsipyle briefly took the little prince Opheltes laid the grass to show the army a source. The boy was bitten by a snake and died, after which the “heroes” had to protect the nurse against a severe punishment. The mythical seer of Adrastos, Amphiaraos, saw the death of Opheltes as a bad omen and therefore had the Nemean Games instituted in honor of Zeus. The referees were dressed in black, and the victors were given a wreath of celery, an herb that would bring no luck.

The stadium of Nemea, just like that of Olympia, can be reached via a so-called cryptoporticus, a long archway under the stands; that of Nemea is in much better condition than that of Olympia. Before they went inside, they could undress the apodyterion, the dressing room, which also dates from 330 BC. and has been preserved relatively well. 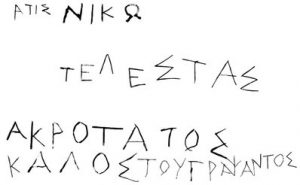 In the cryptoporticus the athletes waited until their name was called. In any case, they stayed long enough to scratch their name in the stones as well as other comments, a single “niko” (I’m going to win), but mostly of gay-erotic content, such as “Epikrates kalós” (Epikrates is handsome), or “Akrotatos kalós” (Akrotatos is handsome; probably here is meant the Spartan king (265-252 BC), who became embroiled in all kinds of adventures because of his beauty. Possibly as a joke it says “tou grapsantos” (for him who wrote this). The games that were held there were among those of Delphi, Olympia and Corinth among the most important games in Greece. An athlete who had triumphed in all four games had achieved the highest achievable. The sports have been largely the same as those in Olympia. 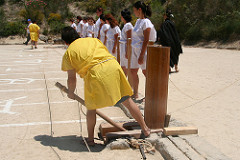 The starting mechanism in Nemea has been preserved sufficiently to make a reconstruction possible, as can be seen on the photo of the start of Nemea 2012. For the organization of the Nemean Games 2016, see the site http://nemeangames.org/ .