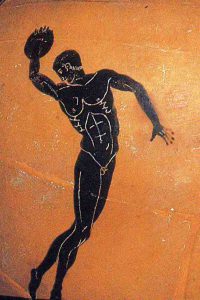 The pleasure that the Greeks had in competitions, running, boxing, discusthrow, etc. is already visible in Homeros in the so-called “funeral games for Patroklos”, held in honor of the cremation of the hero Patroklos. The Olympic Games, like the Nemean Games, had partly the same origin: in Olympia the tomb of Pelops played a central role, while in Nemea official games were held in memory of a little boy – Archemoros – who died there. But furthermore we see a strong religious component predominate. The four great Panhellenic games were held in honor of three deities, Zeus at Olympia and Nemea, Poseidon at the Isthmos and Apollo at Delphi. Of these four, the Olympic Games were the oldest, founded in 776 B.C. and were the example for the later games. The Pythian games in Delphi (like the Olympic games held every four years) were established in 586 B.C., the Isthmian games (every two years) in 582 B.C. and the Nemean games (also every two years) in 573 B.C. Age categories were  drawn up for most parts, for men, youngsters and children. Incidentally, new competitions were also added (such as the mule race, possibly a bowing down to the kings of Sicily where many mules were bred), and also abolished. The Pythian games (in honor of Apollo, the god of music) also included musiccompetitions. In the four Panhellenic games, the prize to be won was exclusively a wreath (and of course fame and honor in the homeland). The smaller games also gave out prizes in kind, often of great value: olive oil in beautifully painted vases in Athens, bronze shields at the Hera games in Argos, woolen cloaks in Pellana and so on. Incidentally, Pindaros and Bacchylides mention many events of which we do not know the exact program, nor the prizes offered. Examples are the plays for Apollo Pythaieus in Megara, those for Iolaos-Herakles in Thebes, for the Graces in Orchomenos, those of Zeus Lykaios in Arkadia, or the games in Tegea, Clitor, Aigina and so on.

Photos on the right, stadium in Epidauros and Nemea. 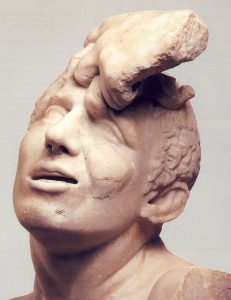 – Fighting-categories. The most important  are boxing, wrestling, and the pankration. This last part was by far the most dangerous, as it involved a combination of boxing, wrestling and kickboxing, with  about anything allowed. As a result, this part regularly led to very serious injuries or worse. There are even some examples of athletes who died in the pankration. These were then posthumously declared the winner. A good example can be seen on the left, where one pankratiast grabs the other by the eye socket (!). The other tries to pull his hand away

The left athlete has his opponent firmly by the throat and presses him back to the ground; he delivers extra blows with his right fist. The image in the middle shows us two heavily built pankrati, wearing a loincloth (perizoma). The left athlete kicks the right athlete in the balls. The right athlete drops to his knees and seems to give up. The trainer (right) also seems to want to signal the end of the fight. The picture on the right shows an athlete who has taken the other in a stranglehold, and here too raises his fist to hit his opponent. 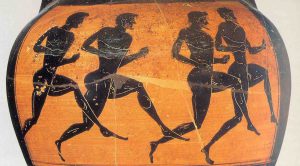 – Running. Different parts can be distinguished here. The stadium run, the oldest categorie of the Olympic games. The winner of this was officially considered “the” winner of the Olympic games and his name was used as a benchmark for the Greek era. In addition, you had the double stadium run, the long-distance run (the dolichos, presumably six times the double stadium run) and the weapon run, where the athletes originally walked in full armor, later with only the shield in hand (by far the heaviest part of the armor) . 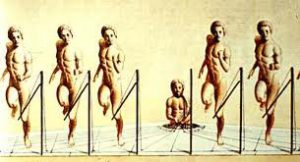 Of particular interest is the discovery of a starting mechanism (hysplex) in the old stadium of the Isthmos. This concerns the central control of starting gates for runners. These fences consisted of a series of barriers, held up by ropes, which were led through channels left in the ground to a hole behind the fences. There, a starter held the ropes. If he let it go, the gates would drop down at the same time and the race was on.

Pentathlon. A number of athletic components came together in the pentathlon. The parts of the pentathlon were 1) discus throw, 2) long jump, 3) javelin throw, 4) running, 5) wrestling. Not all participants made it to the final. The person who finished second in four parts, automatically entered the final and could therefore still triumph. Whoever had won three parts first did not even have to show up, but won anyway. If it did come to a final, the ultimate winner became the one who had won in wrestling. In detail, the parts differed from what we are used to: in the long jump, “jump weights” were used (barbells), which gave the athlete an extra push. Given the traditional distances jumped by the Greeks (over 16 meters!), Most scholars assume that the long jumper (from a standstill) actually made 5 jumps (symbolic of the pentathlon). 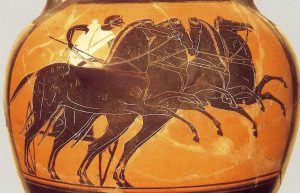 – The equestrian categories. A distinction must be made here between actual horse riding and a chariot race, in which a light cart pulled by four horses had to do no less than 12 laps on the horse track. These equestrian categories brought the most prestige and were also the most popular. Incidentally, in contrast to the other sports, it was the case here that the “sponsor” was declared the winner, not the jockey or driver. As a result, these races soon became a sport for kings or other super rich aristocrats. The fact that the cars crashed regularly, sometimes with fatal consequences, will have supported the wealthy sponsors in their decision not to drive themselves.