During the first period of the reign of King Georgios I, little changed in the government. Greece did, however, receive its first area expansion: on the occasion of the accession to the throne of Georgios in 1864, the English gave Greece the Ionian islands (Kerkyra (Corphu), Kephalonia, Ithaki, Leukas, Zakynthos), which they had 50 years earlier taken from the French as punishment for the Napoleonic Wars. In turn, the French had “inherited” the islands from the Venetians, who had ruled there since 1204. Political parties amounted to relatively little (they mainly served for changes in jobs in the government) and coalitions were quickly forged when they fell apart again. Cabinets succeeded one another at regular intervals (between 1863 and 1875 Greece had no fewer than 23 cabinets!), While it was still the king who determined who could form a new government. It was not until 1875 that the king officially determined that he would always appoint the leader of the largest party to form a government. Partly because of this, the important reformer Charilaos Trikoupis came to power in 1881 with his “New Party”. During the rest of the 19th century, the Western-oriented Trikoupis would switch government with its traditional rival Deliyannis. Trikoupis wanted first and foremost to restore the creditworthiness of his country, and to that he tried to promote industrialization as well as trade. He wanted to build new train connections, had the Corinth Canal dug, Lake Kopaïs drained and tried to modernize the army and fleet. Deliyannis, on the other hand, did not want to know about austerity or higher taxes and in 1897 plunged the country into the so-called “Thirty Days” war in Thessaly against the Ottoman Empire, among other things to support the anti-Turkish revolt in Crete. A terrible defeat followed. Nevertheless, Greece was allocated new territory at the Berlin Conference as early as 1881, in order to hinder Bulgarian-Russian aspirations in that area. Crete also became an “autonomous” territory (under the supervision of Georgios I) within the Ottoman Empire in 1897.

Below: From left to right: The Trikoupis Bridge, already proposed in 1889 by Trikoupis, but only built between 1990 and 1999; the Corinth Canal (2x), begun under Trikoupis and completed in 1892, and at the top right, the construction of the railway line Omonoia-Piraeus and Charilaos Trikoupis itself.

Eleftherios Venizelos and the Balkan Wars 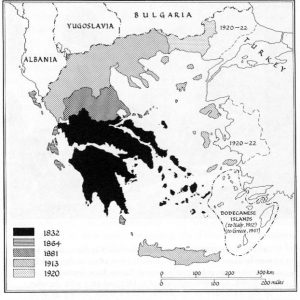 Above: a map showing the phases of the expansion of the Greek territory from 1832 to 1913. Afterwards, only the area around Smyrna / Izmir in Turkey would be added to Greece, and the Dodecanese would be added to Greece in 1947 .
Below: the territorial arrangements from the Bucharest Treaty (August 1913). Source: R. Clogg, A Concise History of Greece, Cambridge 1991. 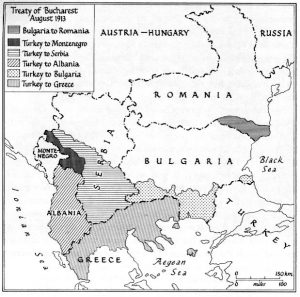 In 1908 the Ottoman Empire shook to its foundations: a military junta, set up from Thessaloniki (then still Salonica) seized power in Istanbul, deposed the sultan and tried to revitalize the Ottoman Empire by promoting equality between Muslims, Christians and Jews. promise. Nevertheless, the Bulgarians immediately declared their country’s independence, Crete declared alliance with Greece and Austria-Hungary took possession of Bosnia and Herzegovina. In Athens, the military also revolted, demanding military reforms and a new government, in which there was no more room for the “old politics”. In place of the old politicians came Eleftherios Venizelos, an ambitious politician who had made a name for himself in the autonomous Crete. In elections in 1910, his Liberal Party won nearly 300 seats out of 362 and pushed through a massive series of reforms in every area, the establishment of a minimum wage for women and children, the legalization of trade unions, and a land reform law that nationalized amongst others monastic grounds.
When in 1911 the Italians in Libya attacked the Turks and occupied the Dodekanisos and Serbia and Bulgaria made agreements in 1912 about a joint action against the still Ottoman Makedonia, Greece could not fail to do so and joined the already mentioned countries. Despite threats from Russia, England and France, Montenegro opened the attack in October 1911, after which in a very short war all of Macedonia was taken by these three countries and in a second war Bulgaria was robbed by Greece and Romania of a share of the booty. As early as 1913, the new national borders were recognized by all concerned. Greece’s territory had almost doubled in these two Balkan wars (although the creation of an independent Albania was a setback for the Greeks, who also wanted the Greek-speaking Northern Epirus to have). The population had increased in one fell swoop from nearly 3 million to 5 million, although a large part of them were Muslim and another important part was Slavs or Jews. Thessaloniki, in particular, was largely (Spanish-speaking!) Jewish, since Jewish refugees had taken refuge in the Turks before the Spanish Inquisition in 1492.
In 1913 King Georgios I was assassinated and succeeded by his son Constantine. For a long time it was expected (and hoped) that Constantine -as heir of the Byzantine emperors- would call himself Constantine XII, thereby simultaneously laying a claim on the still remaining “Byzantine” territory. However, it stayed with Constantine I.

With the outbreak of the First World War in 1914, the question arose in Greece as to which side to participate. This question became all the more pressing when it turned out that King Constantine considered a victory of Germany the most likely (and moreover because he was married to a sister of Kaiser Wilhelm II) and therefore wished to remain neutral while Eleftherios Venizelos, given the historical ties with England, France and Russia wanted to side with these countries. The English promised Greece considerable territorial gains if they could fix the problems with Bulgaria and keep that country out of the war, and Venizelos (who was increasingly hoping for the coasts of Turkey) strongly supported the English, especially when Bulgaria joined the Axis powers and Serbia (still Greece’s ally). He was, however, sidelined by the king in boycotting new elections. As a result, Venizelos increasingly stood for an aggressive foreign policy and the dream of a Greater Greece, while the more traditionally-minded royalists wanted to keep the status quo and first consolidate Greece.
In the end it even split Greece: a military coup in Thessaloniki brought a pro-Venizelos government to power in the “new” Greece, with its own state apparatus and army, while the royalist south took a pro-Bulgarian stance. English and French troops even landed in the Piraeus in 1917 to keep Royalist Greece neutral and to be able to use the ports for the supply of war material. Heavy opposition from Greek royalist soldiers drove the English and French out of the harbor, after which in “ancient” Greece people suspected of pro-Venizelos sympathies were dismissed from the army and state apparatus. The Allies now officially recognized the Venizelos government and demanded the departure of King Constantine, who promptly left the country in 1917 and was succeeded by his son Alexander. Venizelos now became the leader of a “united” Greece and promptly sent troops to the Bulgarian front to fight alongside the Allies. He also had people suspected of royalist sympathies fired from the army and government.
At the 1918 peace talks in Paris, Venizelos wanted to secure the reward by claiming Smyrna (where more Greeks lived than Athens at the time) and east and west Thrace up to and including Constantinople. During the peace talks, however, Italian troops landed in the vicinity of Smyrna, whereupon Greece was encouraged by America and England to land there as well. In May 1915, Greek troops also landed in Smyrna and were promptly guilty of terrible atrocities, killing or wounding more than 350 Turks. This, among other things, strongly fueled Turkish nationalism, with the first fighting between Greek and Turkish troops under Kemal Atatürk. Nevertheless, the Treaty of Sèvres was already signed in 1920, granting the Smyrna region to Greece for a period of 5 years, after which a referendum would have to decide on the further future. Two months later, King Alexander died and Venizelos was crushed by the royalists in new elections. A referendum brought back King Constantine, followed by another round of revenge and dismissals, again for the Venizelos supporters.
Constantine’s return also marked a significant setback in the military successes of the Greeks in Turkey. Italy and France made peace with the Turks and from now on would only sell weapons to Kemal Atatürk’s Turkish troops, and England took a neutral position. A major Greek offensive towards Ankara stalled, after which Kemal Atatürk launched a counter-offensive in August 1921, which led to the capture of Smyrna on September 8. This resulted in a mass slaughter of the Greco-Armenian Christians with more than 30,000 victims and the city (except for the Turkish-Jewish neighborhoods) burned down completely.
In effect, the idea of ​​a “Great Greece” had died out and new peace talks led to the Treaty of Lausanne in 1923, which included a large-scale population exchange: all Muslims from Greece would be deported to Turkey and vice versa all Christians would be deportedfrom Turkey to Greece. These ethnic cleansing have made Greece one of the most ethnically homogeneous countries in the Balkans, although of course there were problems. First of all, the new Greeks had to be settled somewhere. The new government nationalized the vast areas of the monasteries on Athos, where many hundreds of thousands of refugees were settled, while many other refugees settled in the Piraeus, where they would form a poor, drug-using underclass, with its own (sub) culture and its own music, the Rebética, which songs about drugs, macho behavior, poverty and the lost homeland. 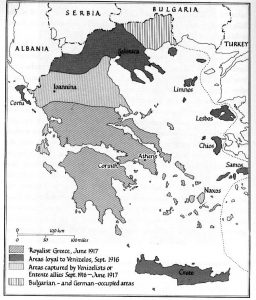 A map showing the division of Greece into a pro and an anti-Venizelos camp.
Below: a map showing the settlement of refugees from Turkey and below a portrait of Kemal Atatürk.
Source maps: R. Clogg, A Concise History of Greece, Cambridge 1991. 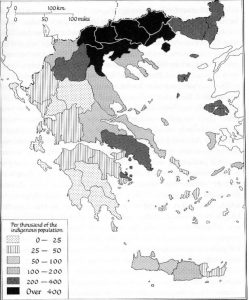