The Agora Museum in the rebuilt Stoa of Attalos contains objects from almost the entire settlement history of Athens. However, only finds that have been found on the agora in Athens are shown. In the earliest times the area is still used as a burial ground, and countless artefacts come from Mycenaean chamber tombs, while cremation tombs are regularly constructed in the Geometric period (900-700). The agora museum therefore houses some of the most beautiful geometric burial vases in Greece. But there are also numerous finds from the later (classical-Roman) period.

Very special are the many artifacts that have to do with the functioning of the Athenian democracy and jury courts. For example, we see here a fragment of a so-called kleroterion, a machine that was used to ensure that the selection of the jury at various courts took place absolutely at random. In the slots shown citizens put a bronze note (pinax) per ‘tribe’ (the citizenry was divided over the centuries into ten, eleven or twelve tribes depending on the period). Then the presiding magistrate drew a black or a white ball at random using yet another machine. If he drew a black ball, the entire row (each containing a group of candidates from all the tribes of Athens) was rejected, after which the procedure was repeated for the next row. If he drew a white ball, those citizens were assigned to the courts. The procedure was repeated until all courts were provided with a sufficient number of jurors. 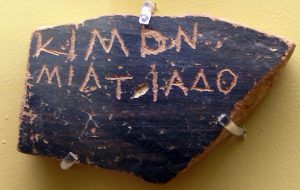 Equally special are the many ostraka (singular: ostrakon) on display, a shard with the name of an Athenian politician who, for one reason or another, prefer to see temporarily leave the city. The shards were used in the procedure known as ostracism. Once a year the popular assembly of Athens was asked whether it was believed that there were citizens who were all too powerful and who could try to seize power. If at least 6,000 civilians believed that this was the case, a kind of impeachment procedure was decided. The citizens were asked to scratch the name of the (according to them) suspected citizan on a shard (paper was too expensive for everyday use), after which the citizen whose name was most frequently mentioned was banned for a period of ten years. Incidentally, this meant no further punishment, his property remained untouched and after 10 years he was allowed to return without any problems. Notable are the many cases in which well-known Athenian orators have been mentioned. 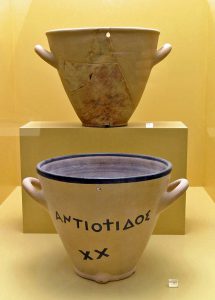 Finally, interesting is the precursor of the hourglass, the klepsydra (literally ‘water thief’), which was used to distribute the speaking time at courts, among others, completely evenly. Water ran through a spout from an above vessel into a vase. Once the particular vase was full, a certain amount of time had passed. By now allocating the speakers in a court case (prosecutor, defense) a predetermined number of ‘vases’, it was possible to allocate the prosecutor and defense an exactly equal speaking time. The specimen shown here dates from the classical period. In later times much more advanced copies were made, often with all kinds of mechanical additions. However, the principle always remained the same.

A small selection of the other finds is shown below: