Lycosoura, the sanctuary for Despoina, is very beautiful to see, especially because the barely weathered remains would allow an almost complete reconstruction. On the grounds of Despoina – apart from the remains of a prostyle temple – remains of an arcade, several altars and a stepped supporting wall, while on the other side of the road you can see the (much less recognizable) remains of cisterns , and from an underground room with a roof supported by columns. Fragments of the (more than life-sized) statue of Despoina and the sculpture group described by Pausanias have been recovered and are partly preserved in the National Museum of Athens and partly in a small building on the spot, which unfortunately is not always open.

Images: above a map of the sanctuary, top right an overview photo with the Megalopolis power plant in the background, left and directly below photos of the temple complex and a reconstruction of the sculpture group from the temple and three fragments from the NAM. The reconstruction is partly based on coin finds. Drawings from Papachatzis. 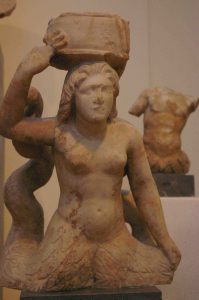 On the right, a fragment of Despoina’s clothing, with inter alia half-human, half-animal musicians, possibly the priestess and followers dressed up for a mystical ritual. Fragments of the sculpture group can be seen in the NAM in Athens and in the museum of Lykosoura itself.