Ancient Thorikos is not in its entirety discussed  by Pausanias, and therefore must have been almost deserted in his days. Thorikos was an important settlement in prehistoric times, and was also very important in the classical period. The town was considered a port and was important enough to be protected by a fortress. Antique remains currently show the foundations of countless classic houses, and the oldest stone theater in Attica, with a very special shape: instead of a semicircle, as usual, the stone seats form a half ellipse. At one end there is a temple of Dionysos, at the other a complex of small rooms.

Excavations in and around Thorikos are coordinated by the universities of Ghent and Utrecht. See their website.

Of great importance is the ongoing study of the theater and the publishing of the research data by the University of Ghent, led by Professor Roald Docter, who in their first publication  calls for support for the research: http://www.ebsa.info/ pages / data / doc / Thorikos__ENG.pdf
Derived from his work is a photograph of a model of the oldest phase of the theater, with the temple of Dionysus. 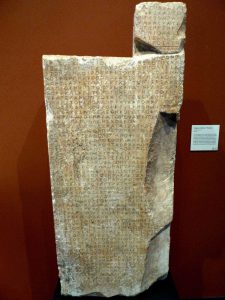 An early classical inscription from Thorikos (now in the Epigraphic Museum of Athens) records extensive sacrifices in honor of Kephalos and Prokris, who lived in Thorikos when Oedipous was King in Thebes. Their tragic love story was the subject of a tragedy of Sophocles (of which only a few words remain), and was already widely known centuries earlier (Prokris is already mentioned by the author of the Odyssey in a list of women with an unhappy love story, together with Ariadne (abandoned by Theseus) and Phaedra (in love with her stepson) The full history is described in detail by Ovid and Apollodorus and is touched upon by Pausanias.

The fact that Thorikos has been an important settlement in prehistoric times  is shown, among other things, by the enormous Mycenaean tholos tomb from about 1200 B.C., which makes it clear that southern Attica had its own dynasty at that time, it is also evident from mythology, where Theseus had to fight his relatives in Sounion.

A few hundred meters to the southwest (follow the path along the bed of the river, recognizable by the reed plumes, up to a huge stone block in the middle of the river; cross there and climb over the fence) the foundations of a temple to Demeter and Kore has been excavated. The temple, which was probably never completed, had a very curious construction: two colonnaded halls separated by a dividing wall. The temple was demolished in the time of August and the remains were transferred to Athens, where a new temple was erected in the so-called Eleusinion.

Prokris was a daughter of King Erechtheus of Athens; she married the beautiful Kephalos, the son of Deion from Thorikos, Attica, and nothing seemed to stand in the way of their marital happiness, for the two youngsters were madly in love with each other.

Unfortunately, the problems started a month after their marriage. While on a hunt, Kephalos was spotted by the goddess of dawn Eos (or Aurora in Latin), who wanted the boy for herself and kidnapped him during an afternoon nap. In her beautiful palace, Eos tried to seduce him, but Kephalos could only think of his own wife and did not respond to any of her advances. Enraged, Eos eventually let Kephalos go with the prediction that his wife might be less steadfast. Kephalos was consumed with jealousy and suspicion: Would Prokris really ..? Kephalos decided to put it to the test and asked Eos to reshape him. Once that happened he went home and had to move heaven and earth to speak to Prokris. Prokris, meanwhile, was especially worried and sad about the absence of her husband and had no interest whatsoever in the very handsome stranger who pulled out all the stops to seduce her and eventually offered silver and gold to sleep with her overnight. In the end, Prokris gave in, to which Kephalos announced himself and chased her out of the house in shame. Crying and averse to every fellowship with a man, Prokris roamed the mountains, serving only Artemis, and hunting with Artemis in the company of her forest nymphs and living in the free nature, while Kephalos could only think of being with his wife and was no longer able to sleep of longing and sorrow. He eventually went to see her and begged to forgive him, assuring her that he had been unfaithful in exchange for as many gifts as possible.

Once again Prokris let herself be talked round, she left the mountains and returned home with Kephalos and handed him two gifts she had received from Artemis: a hunting dog named Lailaps with the quiality that he would never let a prey escape and a hunting spear from an, on this earth unknown, wooden type, with a golden point. This spear was made so thay it could never miss. Despite initial difficulties, a time of sweet happiness now began. Kephalos loved Prokris and they rarely loved each other like two other people.

Unfortunately, this condition would not continue. Kephalos still went hunting often, as he did before, he left early, with his never missing spear, a canteen with water, bread, cheese and olives and crossed the woods, climbed rocks and felt one with nature. His dog Lailaps was petrified, along with the prey, the teumessian fox, by the gods in the vicinity of Thebes. He missed the animal daily, but the joy of the hunt made him forget everything. When the sun shone higher and higher and Kephalos was heated from the hunt, he lay down to rest and eat, then called for a cooling breeze: Aura, aura, come and pamper me, let your breath touch my whole body. I glow with longing for your tender embrace. These words, proclaimed in a lighthearted mood, would cost Kephalos dearly. Another hunter heard Kephalos and conveyed his words to Prokris, who was immediately struck by jealousy. When Kephalos went hunting again, she crept after him, not knowing whether to catch him or not. After a strenuous hunt and chase, Kephalos lay down sweaty and called for Aura, the cooling breeze. Prokris heart stopped. To see him through the bushes she pushed forward and broke a dry branch with her foot. Kephalos heard the sound, grabbed his spear, and swung it smoothly at his prey in the bushes. A horrible scream tore his joy at another successful hunt. When he stopped at a dying Prokris, the lovers could do no more than say goodbye, both with regrets in their hearts.

Convicted of manslaughter, Kephalos went into exile to Thebes where he helped Herakles’ father fight the Teleboers. Then he moved to the island of Kephalonia, which is named after him. (see Pausanias 1.37.6).

Right: Tapestry from Edingen (King Boudewijn foundation), with a forestlandscape and details such as Prokris who hands over her dog and spear to Kephalos.
Under: Jean-Honoré Fragonard, Cephalus en Procris, 1755