Welcome to the Pausanias-project, a site with over 2500 photo’s and maps, containing descriptions of classical and later Greece. The site is meant as a pictorial commentary to the Dutch translation of the antique “travelwriter” Pausanias (ca. 150 AD) by J. Abbenes, but can be used with all translations. The site is set up according to Pausanias’ division of Greece in 9 regions.
This site will be updated regularly. It is meant to cover eventually all places visited by Pausanias. Pages about the history of Greece will present a global view of Greece áfter Pausanias. 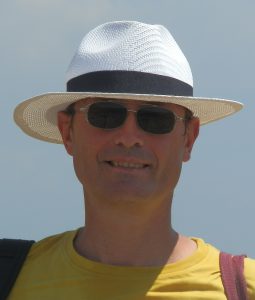 after my study Greek and Latin at the Free University (VU) in Amsterdam, I have worked at the Thesaurus Linguae Graecae in Hamburg, and have done PhD research at the Free University (VU) in Amsterdam, where I also worked a short while as teacher. Later I took up jobs at several highschools (now: Gymnasium Celeanum Zwolle).
Since 1980 I have spent most of my holiday’s in Greece. Over the last 7 years I have been researching all sites in Greece which are described in Pausanias’ description of Greece. At the same time I have made the first complete translation of Pausanias in Dutch.
More information on LinkedIn 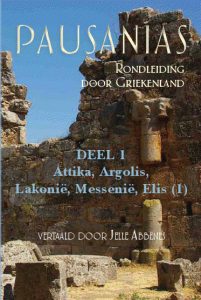 Who was Pausanias?
About the life of Pausanias nothing is known except for sparse remarks in his own work. Even his name may be regarded as uncertain: it is first mentioned by the Byzantine scholar Stephanos of Byzantium (6th century A.D.), and does not recur in the travelguide itself. Where Stephanos found this information is unknown. Pausanias was born  about 110-115 A.D., probably in the neighborhood of Magnesia  near the mountain Sipylos in present-day Turkey, at that time a Greek speaking part of the Roman empire. He has spent a great part of his live (starting at least in 160 A.D.) travelling all over Greece to visit “the famous places of Antiquity” and to see and decribe all  things he considers “worthwhile”. Marcus Aurelius (who died 180 A.D.) is  the last emperor mentioned by name in his work. Therefore, it will probably have been completed about 180 A.D.
In  ten chapters Pausanias describes a literary journey along well and less well known places on the Greek mainland in Roman times. Arriving by ship in Athens he takes his  readers on a tour around Athens (discussing temples and other noteworthy buildings, myths, and art in the city) and the countryside. Then he leads the reader on foot, by donkey and per ship via Corinth to Sparta and Messenia, thence to ancient Olympia, the description of which – with it’s gorgeous temples and hundreds if not thousands artworks – occupies the center of  his work. From Olympia the journey goes on through Achaea and Arcadia via Boeotia (with Thebes as the residence of the mythical king Oedipus) on to Delphi, which also gets ample attention. Central in the work of Pausanias is the description of temples and their treasures, seesawed with hundreds of anecdotes about artists, contestants in  events like the Olympic Games, episodes from Greek history and natural history. But apart from the main sanctuaries, he describes hundreds of smaller cities. That we are dealing with a literary work reflecting the tastes of it’s time, becomes clear in many aspects of his work, both in subject matter and in his elaborate literary style.

The website is meant to support and visualize my recent Dutch translation of Pausanias, Periègèsis tès Ellados. The website will contain descriptions of all 9 regions of Greece covered by Pausanias. I will also give a selection  of  the most important archaeological museums in Greece and an overview of the history of Greece after Pausanias. Almost all photo’s have been made by me or my wife. Site-plans are often taken from the official excavation-reports or the illustrated edition by Papachatzis. The maps used in the website have been made by me. All illustrations are copyrighted and may not be copied without written permission. If I have used illustrations by others which are still copyrighted, I kindly request the user of this website to inform me. I will remove the illustration during the next update. 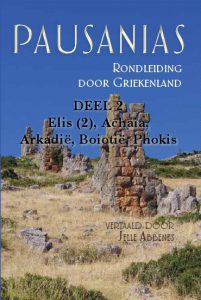 The Pausanias-project: a new translation
The Dutch translation was made directly from the ancient Greek text and is being supported by hundreds of footnotes which inform the reader on Pausanias’ references to places or ancient texts, the exact location of the sites discussed, remaining monuments or particularities in the history before or after Pausanias. A large index covers most sites, monuments or persons discussed. These notes have been largely derived from the awarded modern Greek Pausanias-edition by Papachatzis as well as from the standard commentary by W. Frazer.  A further important source of information has been the classical dictionary Der Neue Pauly, Lexicon der Antike. Finally dozens of recent articles have been consulted.
Interested?
The Dutch translation (Pausanias, Rondleiding door Griekenland) may be ordered at www.boekscout.nl or www.athenaeum.nl (webshop) or by sending a mail to abbenes@gmail.com. We will contact you as soon as possible.