The Latin States in Greece

The agreements with the Venetians laid down in the so-called partitio Romaniae (or the “division of the Roman Empire”) led to the division of the Byzantine Empire into a number of Latin states. Where Boudewijn was allowed a quarter of the territory, three quarters was divided among the many knights.

Boniface of Montferrat took possession of Thessaloniki with the support of the Venetians (to whom he attributed Crete). Nominally he fell under the Emperor of Constantinople, but as king he could actually do whatever he wanted. Boniface immediately turned to the south, where he achieved the necessary success despite fierce resistance from Byzantine governor Leon Sgouros (who had conquered his own state). In 1204 Boniface conquered Athens, which he gave as a fief with Thebes to Duke Otto de la Roche. However, his kingdom was short-lived: as early as 1224, the kingdom of Thessalonica fell prey to Theodoros I Archangelos, the Byzantine ruler of the despotate of Epirus. The Empire of Nicaea also strived to conquer Northern Greece, and after the Bulgars first chased the despotate of Epiros from Macedonia and Thessaly, the “emperor of Nicaea” John Vatatzes in turn succeeded in expelling the Bulgars weakened by death of their ruler Tsar Iwan Asen II and the attacks of the Mongols. In 1246 Vatatzes also conquered Thessaloniki, after which the despotate of Epiros surrendered and Vatatzes recognized as emperor.

William de Champlitte and Godfrey de Villehardouin conquered the Peloponnese between 1204 and 1205, where they initially operated as feudal lords to the king of Thessaloniki. As The Principality of Achaia, this conquest would last for a long time. Especially in the beginning, the collaboration with Otto de la Roche, the Duke of Athens, was very cordial.

Finally, the Venetians, who had received Crete from Boniface of Montferrat in 1204 and later bought some islands in the Aegean Sea from him, seized Kephallonia in 1209, Euboia in 1211 and Kerkyra (Corfu) in 1215. Together with the extreme southern tip of the Peloponnese (at Korone), these islands were the most important points of support for the Venetians for their fleet in trade with Constantinople.

Only a few material remains of the Duchy of Athens of Otto de la Roche have been preserved. After Otto Godfrey had helped de Villehardouin to consolidate his hold on the Peloponnese, he was rewarded with the cities of Damala (Troizen) and Argos. In Athens, Otto built a stone tower on top of the Propylaia (demolished in the 19th century) and transformed the Parthenenon into a cathedral called  “Notre Dame”. He also established the Cistercian monks in the Byzantine monastery of Daphni. In Thebes he built an important castle on the remains of the Kadmeia (the old acropolis), of which now almost nothing remains. As the center of the silk industry, Thebes was the economic heart of the Duchy. In 1225 he surrendered the duchy to his cousin Guy I de la Roche and left for Burgundy with his wife.

A descendant of Otto, Walter V de Brienne, was seriously cornered by the Byzantines, who were trying to restore their rule over Greece. He therefore hired a large troop of Spanish mercenaries, the Catalan Company, to repel the Byzantines. When the Company succeeded, Walter tried not to pay the agreed wages, after which the Catalans revolted against him. Walter marched against them with a huge force, which included almost all the major Frankish rulers of Athens and the Morea and a large Greek infantry force from Athens. In the subsequent battle of Halmyros in Boiotia (1311) by the Kephisos River, the Catalans destroyed almost the entire Frankish knighthood in Greece and took over the Duchy of Athens, with the exception of Argos and Nauplia. 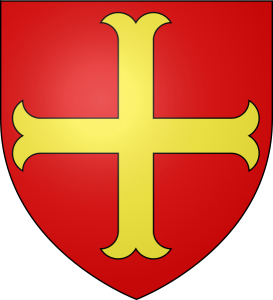 Coat of arms of the de Villehardouin family, princes of Achaia.

Under the reign of William de Villehardouin, Godfrey’s grandson, the principality reached its peak. His court at Glarentza – where William had his own coins minted and where French was spoken – was visited by troubadours. In 1249 William moved his seat of government to the newly built Mistrás, near ancient Sparta. However, the first blow came in 1259: as an ally of Michael II, the despot of Epiros, he went up against the Byzantine emperor, Michael VIII Palaeologos of Nikaia. In the battle at Pelagonia, however, he was betrayed by the Epirots and captured by the Byzantines. Only three years later he was released in exchange for 3 great castles that dominated Lakonia. From then on, the principality was in constant battle with the Byzantines. In the 14th century the principality became the subject of a power struggle between all the great royal houses of the west, until in 1432 Thomas Palaiologos – then despot of the Morea – succeeded in annexing the principality by marriage to the daughter of the last “independent”. prince of Achaia, Ladislaus the king of Naples. The final reunification with the Byzantine Empire around 1450, however, had no great future, because the Turks conquered the Morea in 1460.

Numerous castles and other fortifications still testify to the power of the princes of Achaia. In many cases the original Frankish castles were later expanded by Catalans, Venetians and Turks. A few are listed below.