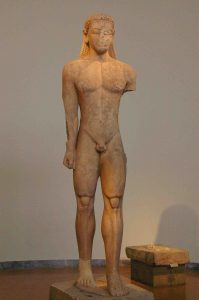 Cape Sounion is the most soutern point of Attica. It is a rocky cape, which rises about 70 meters above the sea, with a temple dedicated to Poseidon built on top of that rock, built around 444 BC. The friezes of the temple (now very fragmentary and only on display in the museum) ishow amongst others the contest between Athena and Poseidon, with the stake  the patronage of the newly founded city of Athens. During the Peloponnesian Wars (in 413 BC), the Athenians fortified the temple settlement to prevent the cape from falling into Spartan hands, which would jeopardize the supply of grain to Athens.

Besides being a place for the temple, cape Sounion also served as a lookout for Athens, and as a fortress for the town of Sounion. The site was subjected to archaeological research by Dörpfeld in 1884. In 1906, two larger-than-life archaic kouroi were recovered east of the temple.

Sounion is very popular with tourists, but also with the Greeks themselves, who like to watch the sunset. Many people, including Lord Byron, have carved their names into the stones over the centuries.

A second temple was built just northeast of the famous temple to Poseidon, for Athena, a building discussed by the Roman architect Vitruvius for its peculiar shape, with only a row of Ionic columns on the east and south sides The temple, dim. 16.4 x 11.6 m., contained a colossal statue, the pedestal of which is still preserved. Four columns within the cella served to support the roof. This temple was partly demolished in the first century BC, to establish a new temple on the Athenian agora with the marble.

Next to this temple was a small Doric temple, founded in the 6th century BC, destroyed during the Persian wars and rebuilt afterwards. It is unknown to which deity the temple was dedicated, possibly also to Athena, or to the heros Phrontis, who is said to be buried here. The circular structure is also probably related to the heros Phrontis. Cf. H. Abramson, A hero shrine for Phrontis at Sounion, in: California Studies in Classical Antiquity, Volume 12, ed. W.S. Anderson.

In the Odyssey (3,282 ff.), Nestor tells Telemachos how on the  journey back from Troy at cape Sounion Phrontis, the son of Onetor, the helmsman on Menelaus’ ship, fell overboard. Menelaus then waited a few days at cape Sounion to bury Phrontis on the spot, while Agamemnon and Nestor made their way home. The discovery of a proto-attic painting depicting a group of warriors on board a ship, with a mate on the back, has led to the suspicion that from 700 BC, but possibly much earlier, there was a cult for Phrontis as patron of ships. In addition to this painting, many hundreds of finds were made on the spot, including miniature shields, miniature tripods, etc. The passage at Homer, where the poet dwells  on death and funeral rites for an otherwise insignificant person, would then have been made up  to explain the existing cultic practice.