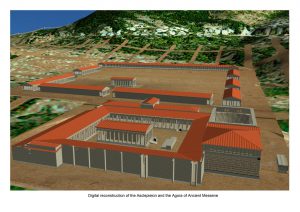 The city of Messene (Μεσσήνη) was built under the command of the Theban general Epameinondas, to serve as one of the heavily fortified cities that together with Megalopolis and Mantineia in Arkadia had to restrain the Spartans, after centuries of suffering and oppression of the (Doric) Messenians. According to the historian Diodoros Siculus, the walls were completed in 85 days. In 214 Messene was besieged by the Macedonian freebooter general Demetrios of Pharos, who was also killed there. In 202, the Spartans under their tyrant Nabis made a futile attempt to take the city. When the Messenians decided to leave the Akhaian League, the allied army under Philopoimen attacked the city, on which occasion Philopoimen was captured and died in prison. The city was still of some importance in the Roman imperial period, and remains of an early Christian basilica testify to the city’s survival. Where ecclesiastical archives from the 10th century still mention Messene, it is no longer mentioned in the 15th century. The present-day village of Mavromati [“The Black Eye”, so named after the local source, the Klepsydra of Pausanias, which fed the great Arsinoe fountain in the city] occupies part of the remains of the ancient city. The center of the ancient city was the important Asklepios sanctuary situated on the agora, while the Odeion and the gymnasion still give a good impression of the ancient beauty of the city. A visit to the museum of Messene is certainly worthwhile.

Above: the Klepsydra spring in Mavromati, and an overview of the city. Right: the great source of Messene, reconstruction and aerial photo.

The large Asklepios temple in the center of the city is clearly visible in the photos above, taken on the way to the ancient Vourkano Monastery. The Odeion is beautifully preserved and beautifully restored. The Asklepios temple is surrounded by the most important buildings of the city, the Odeion and behind it the council chamber (bouleuterion), and five rooms dedicated to the worship of various gods and the Roman emperors. Messene’s great theater is poorly visible and only impressive as an aerial photograph (source: archeologynewsnetwork.blogspot.com).

An underground space measuring 1.20 x 1.20 m. was known in ancient times as the “Treasury”. It was a hermetically sealed room with an extremely heavy ceiling. The entrance was closed with a 1.5-ton heavy keystone. In this room the famous general of the Achaean League, Philopoimen was imprisoned in 183/2 BC. Before he could be liberated by supporters of the People’s Party, he was poisoned by Messenian General Deinokrates, who led a fanatically anti-Achaic party. After the bankruptcy of his party, Deinokrates and his supporters were taken captive to Sikyon, and stoned there at Philopoimen’s solemn funeral.

The city walls of Messene, with a length of more than 9 km., Were designed not only to protect the city, but at the same time to keep many fields within the walls. Starting and ending at Mount Ithome, the walls followed without interruption (except in some completely inaccessible places) the heavily hilly terrain. The wall itself, reinforced by crenellations and at least 30 also crenellated towers, has an average height of 2.5 m – 4.5 m, and consisted of an outer wall of seamlessly stacked rectangular blocks of stone, the same inner wall, with a filling of rubble in between. Of the great gates, the Arkadian, the Lakonian and the Messenian gates, the Arkadian gate in particular is very well preserved (photo above, plus map). A series of burial chambers next to the gate contain the bones of Messenian aristocrats.

Below: the new Vourkano Monastery in the plain, and the old Vourkano Monastery atop Mount Ithome. High on top of the mountain in ancient times, the sanctuary of Zeus Ithomatas, praised by Pausanias, of which unfortunately no visible remains can be found. However, the antique statue of Zeus Ithomatas is shown on Messenian coins as a precious heirloom, dating back to the time when the Messenians were killed after a rebellion in Naupaktos. From above you have a good overview of the city.

Stadium and gymnasium of Messene, by far the largest and best preserved sports complex in Greece (photo clickable for enlargement). Particularly interesting are the monument to the Saithidas family behind the stadium (mentioned by Pausanias, photos on the right), the propylon (with the game board engraved in the threshold) and the Aristomenes funerary monument, an enormous Hellenistic funerary monument, about which Pausanias tells a wonderful story. The Roman-style toilet is clearly visible, with non-separated seats and a water flow underneath for hygiene reasons.

A huge grave monument from the Hellenistic period lies behind the so-called sanctuary of Heracles. Whether this is the funerary monument that Pausanias refers to as that of Aristomenes is unknown.