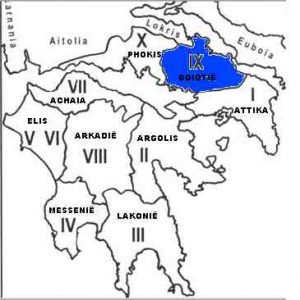 The Boiotian region was certainly characterized in ancient times by a wide variety of landscapes. Of great importance is the Helikon Mountains, Lake Kopaïs (drained by Charilaos Trikoupis) and the mountains along the Gulf of Euboia. The region was (and is) dominated by agriculture, the inhabitants considered the Athenians to be crude and ill-mannered and little inclined to art (although Hesiodos, Pindaros, Korinna and Ploutarchos Hesiodos would think otherwise). The region was originally ruled by the rival cities of Orchomenos and Thebes, but after the destruction of Orchomenos by “Herakles”, Thebes became the undisputed leader of the area, which led among other things to Plataia to place itself under the protection of the Athenians.