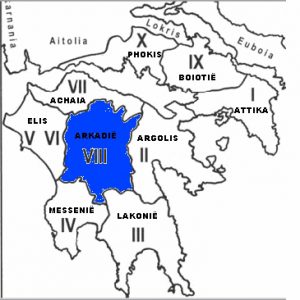 Arcadia, the Greek region surrounded on all sides by other regions and without any connection to the sea, consisted of a number of smaller poleis (city-states) that were isolated from the rest of Greece, and in addition a strong degree of competition. The isolation of Arcadia led, among other things, to the fact that the dialect of the region can still be seen as a direct continuation of the much older Mykean dialect in the classical era, while some of the most remarkable religious customs continued to live on here. Given Pausanias ‘interest in the freak, it is no wonder that Pausanias’ chapter (“book”) about Arcadia is by far the longest of all his chapters, with the possible exception of his paragraphs about Elis, which are divided over two books.