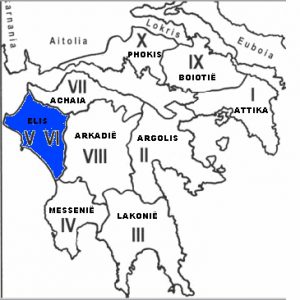 The history of the Elis region is closely linked to that of the city of Elis. The area is bordered on the north by Achaia (the Larisos River) and on the east by Achaia and Arkadia (the Skollion Mountains or Santameri). The originally independent areas of Pisatis and Triphylia in the south, since the conquest of them by Elis city are counted to the region Elis. The area is extremely flat and mainly consists of river sediments, with some rocky capes on the coasts.

The Elis area has been inhabited since the Stone Age, but has long lacked important settlements. Homeros already calls the area Elis, but speaks of the inhabitants as Epeioi. The capital Elis was founded in 471 B.C., and from its foundation had a democratic government based on the example of Athens. The imperialist tendencies of the capital emerged at the same time with the submission of the areas of Pisatis and Triphylia. During the Peloponnesian Wars, Elis was initially on the Spartan side, but later (after a conflict with Sparta for control of Lepreon) on the Athenian side. With the Athenian defeat to Sparta in 404, Elis started new conflicts with Sparta, forcing Elis to release his “allies” and re-join the Peloponnesian League. The Spartan defeat at Leuktra (369 B.C.) gave the city back its freedom and with it the opportunity to subdue the surrounding cities. In a conflict with Arkadia, even the sanctuary of Olympia becomes the battleground for a short time. In the Hellenistic period, Elis constantly changes allies, who alternately liberate Triphylia or help add it to Elis. In 191 B.C. Elis joins the Achaean League, from 146 B.C. (united with Triphylia) to come under the Romans.
With the demise of Olympia as Greece’s most important sanctuary, the Elis region is losing its supraregional importance. In the Middle Ages, the northern part of Elis belongs to the Principality of Achaia, a Frankish principality ruled from Kyllene (then called Glarentza, with the strongest fortress the impressive Chlemoutsi) that has long survived under the Byzantine reconquista.