The early Byzantine period is the restoration after the collapse of the western Roman empire in 453 A.D. under Emperor Iustinian (527-552). This emperor, ushering in the golden age of the early Byzantine era, devoted much of his time, and much of the funds of his empire, to the restoration of the old Roman Empire. For example, Iustinian’s armies fought in North Africa, which had been lost to the Vandals, in southern Spain, which had fallen to the Visigoths, and in Italy, which had fallen prey to the Lombards. The great successes of his time bear witness to the construction of the Hagia Sofia in Constantinople and the beautiful mosaics in the churches he founded in Italy. His dream of a re-establishment of the old Roman Empire was vigorously pursued by some of his successors, notably Herakleios (610-642), but was eventually disrupted by, among other things, the start of the migration of the Slavs to the Balkans and advance of the Arabs, inspired by Mohammed.

Under the heading of early Byzantine church architecture, I show here the large churches and basilicas that are inspired by, among others, the Hagia Sophia in Constantinople, which was built by Emperor Iustinian. The most important innovations consist of the introduction of dome construction in church architecture. 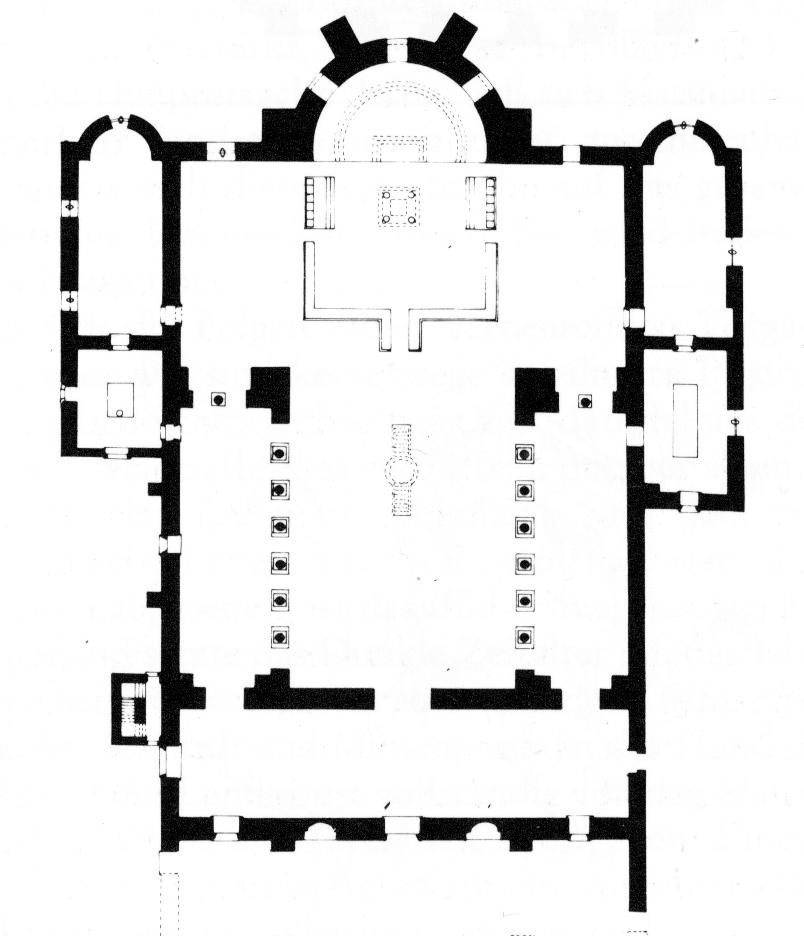 The remains of the so-called Basilica B in Philippi from the 6th century form an impressive whole, even though they also testify to an architectural failure. The architect tried to build a typical church from the school of Iustinian (the church is inspired by the Hagia Sophia and the Hagia Eirene in Constantinople), with a brick dome and a colonnaded gallery. Unfortunately, the east wall collapsed under the weight of the dome before the church could be consecrated, while the gallery survived for several centuries. No less than 7 churches were built in this city between the 4th and 6th century, each one more beautiful than the other. Unfortunately, the city was hit by an earthquake in AD 619, which razed all buildings to the ground, and from which the city has never recovered.
Only rarely do we find a completely preserved church from this period in Greece (in Thessaloniki) and even then the interior decoration has often been demolished, because the Byzantine empire has experienced its own iconoclasm. Under the influence of teh Islam, the Old Testament prohibition on making (and worshiping) images of people, animals or plants for some time (especially 7th and 8th century) was taken seriously again, with mosaics from the Iustinian churches being cut away, icons destroyed and the “worshipers” of these icons were murdered. That is why we have to travel to Italy for the earliest mosaic art of Byzantium.

The dark ages of the Byzantine Empire (6th and 7th centuries)

Soon after Iustinian’s death, the Byzantine Empire deteriorated so fast that its total destruction was imminent. Italy was largely (except Ravenna) lost to the empire, through the conquest of the country by the Lombards, a fifty-year war with the Parthians went worse and worse. The Byzantine possessions in Spain were lost to conquests by the Visigoths, while from the 7th century all of northern Africa was overrun by the Arabs. Finally, before AD 600, the important Danube border of the empire collapsed under pressure from Avars, Bulgars and Slavs. The latter moved southward in large or smaller groups and settled all over Greece. The early Byzantine text “The Miracles of St. Demetrios” mentions how the Slavs attacked the city of Thessaloniki, but were forced to drip off from St. Demetrios. At the same time, the “Chronicle of Monemvasia” reports how Slavs occupied most of the Peloponnese and were able to live there from 587 to 804 independently of the Byzantine Empire. In Greece most of the cities became ghost towns during this time, abandoned by their population. Several factors contributed to this situation, partly the population declining in the time of Pausanias, partly the invasions of the Goths, partly the settlement of the Slavs in Greece. Where Byzantine governance techniques persisted in the Arab world and Byzantine construction techniques under the early caliphs led to the Great Mosque in Damascus, the Dome of the Rock in Jerusalem and the Umayyad palaces in the Jordan desert, Slavic Greece of the 6th and 7th centuries no significant construction activity takes place (again, except in Thessaloniki).

The so-called Colossus of Barletta, a huge late Roman early Byzantine statue. It is traditionally identified with Emperor Heraclius (575-641) who fought successfully against the Persians. The rise of the Arabs would eventually kill him.

The Byzantines used the so-called Byzantine fire against Arab conquerors. It is partly through to this wonder weapon that the Byzantines were able to stop the conquest of Constantinople and Greece by the Arabs. The exact recipe is still a mystery, due to the extreme secrecy with which this weapon was made. It was only allowed to be made in a few places near Constantinople.

Use of the Byzantine fire is first mentioned in the repulsion of an Arab raid on Constantinople in the 7th century. It would remain in use until the fall of the Byzantine Empire in 1453, although its importance had diminished with the arrival of gunpowder.

The Byzantines used Byzantine fire against the Arabs. Image in manuscript

The Arab march and Iconoclasm

The rapid advance of the Arabs and Islam as a whole, wiping out any resistance on the part of the Byzantines, soon led to a rethinking of the faith. Confronted with the Arab successes, the fear arose that perhaps breaking the commandment in Genesis – forbidding portraying humans and animals – had led to divine punishment. As a result, a movement against icons and mosaics arose in Byzantium, strongly supported by several emperors (especially Leo III, 685-741). The movement led to the destruction of most of the mosaics in the Byzantine East and to the terrible persecution of many monks, who would not give up the worship of the ancient icons. The fierce protest of Pope Gregory III (who convened a synod in 730 to condemn Iconoclasm) were to no avail. In 780, the under-aged Constantine VI became Emperor of Constantinople. His mother Eirene acted as guardian, and requested the Pope to convene a synod on Iconoclasm. After the synod was forcibly disrupted by iconoclastic troops, a second council of Nikaia met in 787, condemning Iconoclasm as heretical.