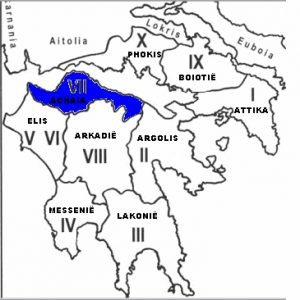 Achaea – The region of Achaia in Pausanias’ time was economically a backward region which was severly underpopulated. Pausanias clearly had great problems to fill a book of 26 paragraphs with his description. To solve this problem, after the inescapable paragraphs devoted to the earliest periods of Achaea, he inserted a digression on the migratory movements which occurred immediately after the arrival of the Dorians (the Dorians drove off the original population of the Argolid – at that time called Achaeans; the Achaeans migrated to Achaea and drove off the original inhabitants – as descendants of a legendary hero Ion these were called Ionians; the Ionians in turn went to Athens, where they were kindly received, but went on to conquer the coastal strip of Turkey (later called Ionia) and driving off (or killing) the original inhabitants of that region, mostly Carians). A second digression on the Hellenistic Achaean League and its downfall in a lasting conflict with the Romans makes up an even longer part of his story. Only in paragraph 16 Pausanias starts with the actual description of Achaea. Still six of the remaining ten paragraphs are devoted to one city only, the Roman colony of Patras.