Nafplio, a Venetian city with ancient Greek roots. Already inhabited in the Mycenaean period, but destroyed around 600 BC. because of the kings of Argos, it was above all the very convenient location that has led to a restoration several times. Known in Venetian times as the Napoli di Romania, modern Nafplio is largely an Italian town. Incidentally, until a few years after the foundation of independent Greece, Nafplio was the first capital of Greece. It was also in Nafplio that the first president of Greece, Johannis Kapodístrias, was murdered in 1831.

Remnants of MycenaeanCyclopic wallwork indicates a fortified Mycenaean town, but the silence of Homer and the poor finds in the chamber tombs indicate an unimportant settlement, possibly dependent on the rulers of Tiryns.

In the 8th century BC. Nauplia was an important power and one of the founders of the Calaurian League, but around 600 BC. the city was destroyed by the kings of Argos, who wanted to get rid of a rival. Around 300 BC. the western part of the Akronauplia was strengthened and Nauplia experienced a new period of prosperity, but in the time of Pausanias it was largely deserted again. 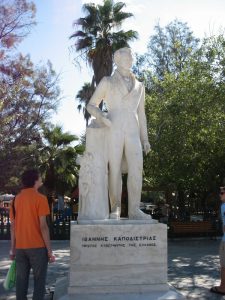 In the early Middle Ages there was certainly a castle and a small settlement, which grew more and more as raids of the Slavs in the Peloponnese set in motion a refugee stream. In the 12th century the Akronauplia was again walled by the Byzantines, often on top of the Hellenistic foundations, and around 1200 Leon Sgouros made Nafplio a center for his own empire, which included Argos and Corinth for a long time with successfully managed to defend against the Frankish crusaders.
The Venetians, who ruled over Nafplio in 1389-1540 and again in 1686-1715, had the greatest influence on the appearance of the modern city. In this second period, the Palamidi hill (named after Palamedes, the son of the founder – hero Nauplios) was provided with very extensive fortifications, which made the city (corrupted to Napoli di Roma) the most powerful fortress of Greece, if not of Europe made. The fact that Nafplio nevertheless fell after two weeks in a new war between Venice and the Turks was due to the enormous understaffing of the Venetian garrison and – possibly – betrayal by the French artillery and the garrison commander. There is nothing left to see of Pausanias’ Nauplia. He is writing:

Nafplia is, I think, fifty stages away from Temenion, abandoned and empty in our time. Founder of the city has been Nauplios, who is said to have been a son of Poseidon and Amymone. Remains of the city walls remain and there is a sanctuary for Poseidon and ports in Nauplia, there is a well called Kanathos. The Argives say that Hera regains her virginity every year by washing there.  (Pausanias, 2.38.2. )

The Venetian lion can be seen in many places of the city, such as below on one of the gates of Palamidi Castle and on the cannons of the Venetians, which can still be seen in the park near the station (near the monument) for Kolokotronis). Originally a heraldic animal, it was associated with the evangelist Marcus, who had been the patron saint of the city since the transport of the corpse of Mark from Alexandria to Venice. For that reason Venice has its San Marco square and basilica, but also almost every place where the Venetians landed are depicted of the Winged Lion.

Another lion, just a few kilometers from Nafplio (lying on the road to Epidauros), is the so-called Bavarian Lion. This lion was hewn into the rocks by order of Ludwich I of Bavaria in memory of his soldiers who had fallen prey to an epidemic in Tiryns in 1833-34, trying to free the land from the countless armed gangs that ravaged the country .