History and mythology are intertwined in Mykene, like nowhere else in Greece. According to Homeros (and Pausanias), the city of Mykene was founded by Perseus when he was back in Argos. Eventually the Perseus dynasty was overthrown by Pelops the son of Tantalos. The genus of Atreus, to which Agamemnon also belongs, is probably derived from the descendants of Pelops, although the details are obscure. In any case, at the time of the Trojan War, the house of Atreus was the most powerful in Greece.

Historically, the site of the later Mykene was already inhabited in the 6th millennium BC. Between 2100 and 1900 BC, a people of Indo-European origin entered Greece and brought to the local population a culturally advanced civilization that, after incorporation of the local culture, would flourish as the Mycenaean civilization named after its most powerful kingdom, Mykene. . Other kingdoms of this culture were Athens, Corinth, Argos, Thebes and Iolkos. The city of Mykene, and probably the other centers of this culture, consisted of a fortified citadel, a palace and a surrounding settlement. The walls were so huge (13 m. High, 7 m. Thick) that the later Greeks assumed that they could only have been built by the cyclopes, one-eyed giants as they are described in the Odyssey. Around 1200 BC, most of the Mycenaean centers were destroyed, presumably as a result of the same popular movements and violent raids that ended the kingdom of the Hittites and were known to the Egyptians as the attacks (and the displacements) of the Sea Peoples. Most of the Mycenaean palaces had in any case been destroyed some 150 years before the Dorians arrived, the work of invasions from outside, or of civil wars and robberies of the Mycenaean centers on each other.

Of the Mycenaean remains seen by Pausanias, the majority are still standing, from the famous lion’s gate to the at least as famous “treasure houses” as those of Atreus and his children, in fact not shaft trenches, but Tholos graves. The tombs mentioned by Pausanias within the walls are very likely to be identified with the royal tombs of tomb circle A directly behind the Lion’s Gate. Excavations since Heinrich Schliemann have uncovered more and more remains and works of art from the ancient Mycenaean civilization, most of which are preserved in the National Museum in Athens, but replicas of which can be seen in the new museum on site. The most famous works of art such as the so-called “mask of Agamemnon” come from the graves of both burial circles and are certainly 300 years older than Agamemnon. 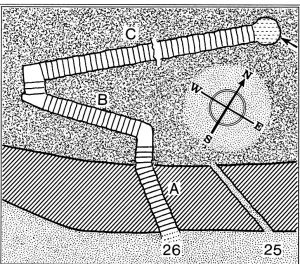 The walls of Mykene, including the famous Lion’s Gate, date from the heyday of Mycenaean culture. Other important elements of the Mycenaean walls are the underground cistern, some 18 meters below the surface and 40 meters outside the walls. Although the passage has been well preserved, today it is not possible to descend into it, unlike a few years ago. The total length was 18 + 20 + 60 steps.

Treasury of Atreus
The majority of the Mycenaean remains described by Pausanias are still standing, from the famous Lion’s Gate (the oldest sculpture group in Europe, dating from 1350 BC) to the at least as famous “treasure houses” as those of Atreus and his children, in fact no treasure houses, but dome-graves dating from 1400-1200 BC. The largest dome tomb (the “tomb of Atreus” was once occupied on the inside with dozens of bronze rosettes, like that of Orchomenos. Not much is left of the original rich decoration of the entrance doors, and most of it is now in the British Museum .. The reconstruction (bottom left), however, gives a good picture.This type of dome grave has been plundered in ancient times in all known cases.On the photos a second dome grave at Mykene, the so-called Tomb of Aigisthos, with the restored dome next to it from the Tomb of Clytemnestra.

As the map in the upper left shows, the necessary graves can be seen in and around the actual castle of Mycene. The most important are the numbers:

1 – Tomb of Atreus, built around 1250 BC, probably the best known, and at least the most impressive dome tomb ..
2 – The Tomb of Clytemnestra, almost as grand in design and execution as the Tomb of Atreus. Given the (scarce) burial finds (two richly decorated mirrors handles and some decorated gems) it belonged to a woman.
3 – Tomb of Aigisthos, one of the earliest dome tombs, built without a relief triangle.
4 – Tomb of the Lions, an intermediate form between the early forms and the largest.
5 – Grave circle B, the most important of the royal grave circles.
6 – Grave circle A.

Grave circle A and B

The tombs mentioned by Pausanias within the walls are very likely to be identified with the royal tombs of tomb circle A directly behind the Lion’s Gate. Excavations since Heinrich Schliemann have uncovered more and more remains and works of art from the ancient Mycenaean civilization, most of which are preserved in the National Museum in Athens, but replicas of which can be seen in the new museum on site. The most famous works of art such as the so-called “mask of Agamemnon” come from the graves of both burial circles and are certainly 300 years older than Agamemnon. Each grave was originally adorned with a tombstone, some of which have been preserved. The figure on the left shows a figure standing in his chariot, preceded by a man with a sword: is this a battle scene, or a nobleman preceded by a herald or bodyguard?

Above: the shaft graves from burial circle A of Mykene, one of the golden masks that have been found there and a gravestone with relief. A diadem and gold paper on a child’s body and 3 swords. For numerous other finds, see museum NAM

Grave circle B is a little older than grave circle A. Because it was not dug up by Schliemann, but only by Mylonas in 1952-4, the results have been very important. There were no cremations, no mummification, no human sacrifices and no terracotta or wooden coffins. Of the 24 graves in the circle, 14 were from 1650-1600 BC.

The buildings must in any case be called the palace, with the throne room (15), a building similar to the throne rooms of Pylos and Tiryns, with a central hearth surrounded by 4 columns, before that an entrance hall (15b) and a propylon. For this an open court (14), a waiting room ((?) 13) and an entrance hall (9). A monumental staircase led to the second floor (11), photo and reconstruction below right.

Unfortunately, virtually no good photos can be made of the megaron, the actual throne room, because nowadays the vast majority are covered with fine gravel to prevent damage. The photos below are therefore not mine, but come (just like the reconstructions) from an older book. Below the throne room twice.

A few more houses are also important, mainly because of the finds that have been made therein. The following is distinguished on the map on the left:

2 – Grain warehouse, consisting of a cellar in which huge storage barrels have been found with charred remains of grain.
4 – House on the driveway, with a vestibule (1), a large hall (2) and three smaller rooms (3,4,5).
5 – House of the Warriors vase. Here too, the basement is particularly visible.
6 – Southern house, in fact three separate complexes.
7 – House of the idols, in which at least 2 shrines have been located, one with frescoes and one with a few dozen goddesses in it.
8 – Tsountas house, with basement, court-hall-megaron (1,2,3), and to the east of it, a shrine.

Three very large houses outside the defended zone make it clear that at the time of the castle construction the Mykeners experienced a period of prosperity and safety. All three were inhabited by very rich traders.
No. 2, the House of the Sphinxes, a house of which only the foundations remain, but which certainly had a second floor. In room 1, 7 stamps with linear B characters were found, in room 6 and 7 tablets. Remains of charred furniture pieces with ivory inlays had fallen from the upper floor. Most important is the relief with the sphinxes.
No. 3, the Oil Trader’s House, with an eastern cellar, with a room (1) with eleven large storage vessels and a tablet with the linear B sign for oil. About 30 jars with oil were orig. ready to be transported just before the house was destroyed.
No. 4, the House with the Shields, consisting of three rooms. Numerous remains of ivory carvings were found here, including the famous warrior with a helmet of wild boar teeth.