The Hephaisteion, the best preserved temple of Athens, was built in the year 449 BC. The reason for its relatively good condition lies in the fact that it was used as a church between the 7th and the 19th century (for that reason there is still a door on the side of the cella). The cella (not accessible) contains, among other things, the gravestone of Lord Byron.
The Hephaisteion is also often called the Theseion (known from the metro station Thisio), named after the Athenian founder-hero Theseus, who is depicted in numerous metopes. The name Theseion is due to an erroneous identification of the temple with a temple dedicated to Theseus himself. In the temple, Hephaistos and Athens stood side by side, both protectors of arts and crafts, who had a child “together”: Hephaistos had been completely adolate of his half-sister Athena for years, and when she came to his workshop one day for help he wanted to assault her. A premature ejaculation (and Athena’s harsh hand) ended his advances and a dirty stain on Athena’s peplum. Athena picked up a ball of wool to wipe the dirt off her dress and thoughtfully threw that  ball on the floor. Gaia, the earth goddess, became pregnant and gave birth to the first “king of Athens”, Erichthonios. This curious myth was depicted on the pedestal of both cult images. It was shown how Gaia presented the baby Erichthonios to Athena, an allegory for the Athenians’ claim that they were “native children” in Greece.

All the metopes of the Hephaisteion are heavily weathered. Sometimes (with some imagination and thanks to 17th century drawings) the performance is still clearly recognizable. On the east side Herakles is depicted with 1) the Lion of Nemea, 2) the Hydra of Lerna, 3) the Hinde of Artemis, 4) the Erymantic Wild Boar, 5) the Bull of Crete and 6) Kerberos.

The metopes on the north side show some of Theseus’ exploits, including 5) the Boar of Krommyon, 6) Sciron ‘the Shovper’, 7) Kerkyon the wrestler, 7) Procrustes, while the one on the south in any case 2) Sinis the Pine Bender, 3) the Bull of Marathon and 4) the Minotaur are shown

The frieze at the front shows Theseus fighting the “50 sons of Pallas” (the Pallantids). Pallas, a son of Pandion and a brother of Aigeus, had long hoped to succeed the seemingly childless Aigeus as king of Athens. When suddenly Theseus showed up from nowhere and was designated by Aigeus as his rightful son and heir, his cousins wanted to challenge him. On the frieze we see Theseus fighting under the watchful (and presumably approving) eye of the gods. 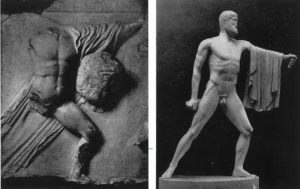 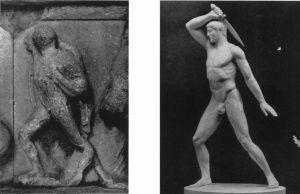 Because both statues of Harmodios and Aristogeiton (performed by Kritias and Nesiotes) since 477 BC. were placed on the agora of Athens (so near the Theseion), every Athenian will have understood the reference. (source: CHARLES. H. MORGAN, THE SCULPTURES OF THE HEPHAISTEION, II. THE FRIEZES)

The frieze at the back represents the battle between the Lapiths and the beast humans the Kentaurs, an allegory for the battle between the Persians and the Greeks, which began in 448 BC. it would be decided in favor of the latter. This makes the Hephaisteion, in fact, just like the Parthenon a monument in honor of the glorious victory of the Greeks over the (beastly) barbarism. A nice detail in this frieze can be seen above: two Kentaurs are fighting the Lapith Kaineus, who was invulnerable. In order to take him out nevertheless, the beast humans hammer him into the ground with a boulder.

According to Ovid, Metamorphoses, Book XII, Kaineus had previously been a woman, Kaenis. Kaenis was raped by Poseidon, who afterwards showed “gratitude” and allowed Kaenis a wish. Kaenis then asked Poseidon to be turned into a man so that she never had to go through this again. Thus it came to pass, and as a bonus, Poseidon granted her that she would be invulnerable to weapons.

At the wedding party from Peirithoös, king of the (Greek) Lapiths and a good friend of Theseus, the king of Athens, the Centaurs (half horse, half human) raped the female guests. A huge fight bursted out, in which Theseus played a leading role. We also see the battle depicted on the pediment sculptures of the great temple in Olympia.